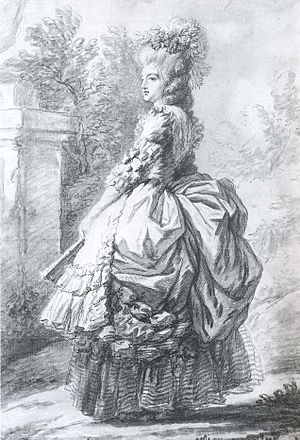 The Petit Théâtre de la Reine (English: The Queen's Theatre) is a small theatre at Versailles near the Petit Trianon. It was designed and built in 1780 on the orders of Marie Antoinette. Her favorite architect Richard Mique did the work. The theatre seats only 100. It was intended for performances by the Queen and her family and friends. At the period, many aristocrats had such small theatres on their country estates to pass the time performing plays and operas.

Mique's exterior is plain, simple, and even severe. The interior is rich with gold, blue, and white decoration. The interior is a wooden room painted to resemble marble. The stage machinery still exists.

In 1780, the Queen and her friends played Pierre-Alexandre Monsigny's Le Roi et le fermier (The King and the Farmer, 1762) in the little theatre. The original forest set and rustic cottage set have survived. They were restored in the 19th century. They were in use in February 2012 for performances of Le Roi at the Versailles Opera.

All content from Kiddle encyclopedia articles (including the article images and facts) can be freely used under Attribution-ShareAlike license, unless stated otherwise. Cite this article:
Petit Théâtre de la Reine Facts for Kids. Kiddle Encyclopedia.