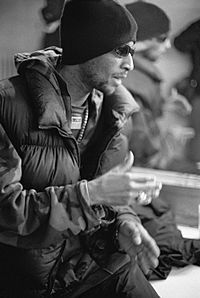 PHASE 2 (born Lonny Wood; August 2, 1955 – December 13, 2019) was an American aerosol artist. He was born in New York City. He was known as member of the Zulu Nation. He was active in the 1970s. Phase 2 was known for creating the "bubble letter" style of graffiti writing. He was also influential in the early hip hop scene.

All content from Kiddle encyclopedia articles (including the article images and facts) can be freely used under Attribution-ShareAlike license, unless stated otherwise. Cite this article:
PHASE 2 Facts for Kids. Kiddle Encyclopedia.