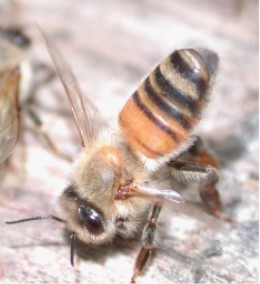 A pheromone is a scent given off by some animals. The scent causes a social response in members of the same species.

There are many types of pheromone, such as:

All pheromones work by inherited instinct, not by learning. They occur in most animals, but are especially obvious in insects. 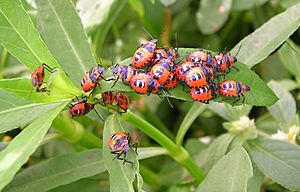 Aggregation pheromones function in mate selection, overcoming host resistance by mass attack, and defense against predators. A group of individuals at one location is referred to as an aggregation, whether consisting of one sex or both sexes. They are nontoxic and effective at very low concentrations.

Some species release a volatile substance when attacked by a predator that can trigger flight (in aphids) or aggression (in ants, bees, termites) in members of the same species. For example, Vespula squamosa use alarm pheromones to alert others to a threat. In Polistes exclamans, alarm pheromones are also used as an alert to incoming predators. Pheromones also exist in plants: Certain plants emit alarm pheromones when grazed upon, resulting in tannin production in neighboring plants. These tannins make the plants less appetizing for the herbivore.

Epideictic pheromones are different from territory pheromones, when it comes to insects. Fabre observed and noted how "females who lay their eggs in these fruits deposit these mysterious substances in the vicinity of their clutch to signal to other females of the same species they should clutch elsewhere."

Releaser pheromones are pheromones that cause an alteration in the behavior of the recipient. For example, some organisms use powerful attractant molecules to attract mates from a distance of two miles or more. In general, this type of pheromone elicits a rapid response, but is quickly degraded. In contrast, a primer pheromone has a slower onset and a longer duration. For example, rabbit (mothers) release mammary pheromones that trigger immediate nursing behavior by their babies.

Signal pheromones cause short-term changes, such as the neurotransmitter release that activates a response. For instance, GnRH molecule functions as a neurotransmitter in rats to elicit lordosis behavior.

Laid down in the environment, territorial pheromones mark the boundaries and identity of an organism's territory. In cats and dogs, these hormones are present in the urine, which they deposit on landmarks serving to mark the perimeter of the claimed territory. In social seabirds, the preen gland is used to mark nests, nuptial gifts, and territory boundaries with behavior formerly described as 'displacement activity'.

Social insects commonly use trail pheromones. For example, ants mark their paths with pheromones consisting of volatile hydrocarbons. Certain ants lay down an initial trail of pheromones as they return to the nest with food.

This trail attracts other ants and serves as a guide. As long as the food source remains available, visiting ants will continuously renew the pheromone trail. The pheromone requires continuous renewal because it evaporates quickly.

When the food supply begins to dwindle, the trail-making ceases. In at least one species of ant, trails that no longer lead to food are also marked with a repellent pheromone. The Eciton burchellii species provides an example of using pheromones to mark and maintain foraging paths.

When species of wasps such as Polybia sericea found new nests, they use pheromones to lead the rest of the colony to the new nesting site.

Gregarious caterpillars, such as the forest tent caterpillar, lay down pheromone trails that are used to achieve group movement. 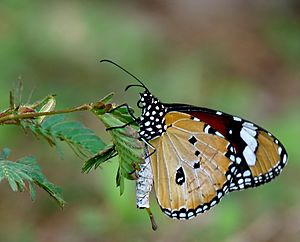 In animals, sex pheromones indicate the availability of the female for breeding. Male animals may also emit pheromones that convey information about their species and genotype.

Many if not all insect species, such as the ant Leptothorax acervorum, the moths Helicoverpa zea and Agrotis ipsilon, the bee Xylocopa varipuncta and the butterfly Edith's checkerspot release sex pheromones to attract a mate, and many lepidopterans (moths and butterflies) can detect a potential mate from as far away as 10 km (6.2 mi).

Pheromones are also used in the detection of oestrus in sows. Sea urchins release pheromones into the surrounding water, sending a chemical message that triggers other urchins in the colony to eject their sex cells simultaneously.

This classification, based on the effects on behavior, remains artificial. Pheromones fill many additional functions.

All content from Kiddle encyclopedia articles (including the article images and facts) can be freely used under Attribution-ShareAlike license, unless stated otherwise. Cite this article:
Pheromone Facts for Kids. Kiddle Encyclopedia.