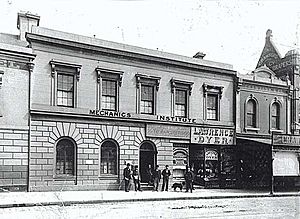 Prahran Mechanics' Institute (PMI) is a community-owned subscription library situated at 39 St Edmonds Road, Prahran, Victoria, Australia. The library focuses on collecting resources about every locality in Victoria and every aspect of the history of the state. The library was previously situated in High Street, Prahran from 1915 to 2014 and Chapel Street, Prahran from 1854 to 1915. It is one of the oldest surviving Mechanics' Institutes in Victoria and one of only six still operating as a lending library. It is the only mechanics' institute in Victoria still governed by its own Act of Parliament.

The Prahran Mechanics' Institute was established in 1854 in Chapel Street, Prahran by subscriptions and donations from the local community in an aim to facilitate lectures, discussions, a library, reading rooms, classes, and a museum.

In 1908 the Prahran Mechanics' Institute established the Prahran Technical School which operated firstly at Chapel Street, then at High Street from 1915 until 1971. In 2004 the High Street building was included in the Victorian Heritage Register for its architectural and cultural significance.

Since 1981 the PMI library has specialised as a Victorian history research collection and as the only lending collection of its kind in Australia.

In 2009 Prahran Mechanics' Institute sold the building located on High Street to Swinburne University of Technology. The PMI then purchased a building in nearby St Edmonds Road, Prahran and relocated in 2014.

The new and current PMI Library at 39 St Edmonds Road, Prahran was officially opened by the Mayor of Stonnington, Cr Melina Sehr and PMI President Cr John Chandler OAM on the 30th of May 2015. 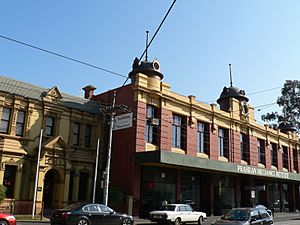 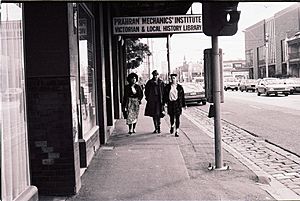 With more than 30,000 books for loan and a professional information service for members, it provides a central resource for research into the history of Victoria and Australia.

The collection continues to grow steadily through purchases and donations. 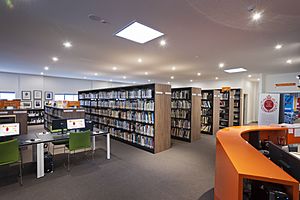 In addition to an extensive lending and reference library specialising in works about Victorian and Australian history, the library organises events, seminars, and competitions to encourage and facilitate the study of history.

All content from Kiddle encyclopedia articles (including the article images and facts) can be freely used under Attribution-ShareAlike license, unless stated otherwise. Cite this article:
Prahran Mechanics' Institute Facts for Kids. Kiddle Encyclopedia.