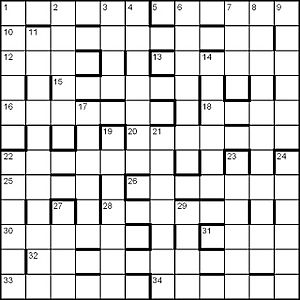 A barred grid, the kind used by Ximenes and Azed in their puzzles.

A Printer's Devilry is a form of cryptic crossword puzzle, first invented by Afrit (Alistair Ferguson Ritchie) in 1937. A Printer's Devilry puzzle does not follow the standard Ximenean rules of crossword setting, since the clues do not define the answers. Instead, each clue consists of a sentence from which a string of letters has been removed and, where necessary, the punctuation and word breaks in the clue rearranged to form a new more-or-less grammatical sentence. The challenge to the setter is to find the missing letters, which will spell out a word or phrase that should be entered into the grid.

A galling remark – an effective riposte is difficult (7)

the correct answer is INSTATE, which can be slotted into the clue to form a new sentence: "Against a telling remark, an effective riposte is difficult". To produce this sentence, a space is deleted between "a" and "galling", two spaces are added into "instate" and the dash is replaced by a comma.

In his analysis of Printer's Devilry clues, Ximenes noted that it was a popular type, arguably easier than the standard cryptic but with the potential to be made more difficult by concealing the position of the break. A difficult Printer's Devilry clue can therefore involve substantial changes to the structure of the sentence, not just the addition of the clue word, as in:

which must be significantly adjusted to produce the sentence: "When he was dancing at the center, I could not see Jose Limon as ticket expenses there were too high." with the clue word MONASTIC.

However, the letters of the clued word always appear in order, and they always appear consecutively – the sentence is only ever broken in a single place.

In Printer's Devilry clues, the surface can be ungrammatical or nonsensical, but the complete sentence should always be logical and natural. A common mistake when setting Printer's Devilry clues is to do the reverse and contrive a sentence which reads naturally on its surface, but which when combined with the answer produces a sentence that is not idiomatic and therefore is impossible to guess. An example of this, criticized by Ximenes, is:

Do all the lines of travel cross in Galway? Slack supervision (6)

The answer to this clue is MORALE, producing the sentence "Do all the lines of tram or a level crossing always lack supervision?" – a sentence Ximenes described as "so unnatural that the clue would be almost insoluble". It is also considered poor form for the break to appear at the beginning or end of a word.

All content from Kiddle encyclopedia articles (including the article images and facts) can be freely used under Attribution-ShareAlike license, unless stated otherwise. Cite this article:
Printer's Devilry Facts for Kids. Kiddle Encyclopedia.