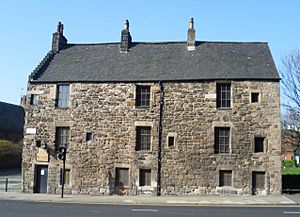 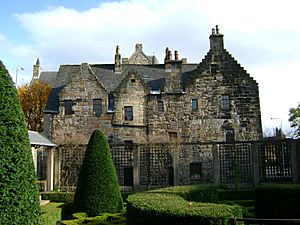 The rear of Provand's Lordship 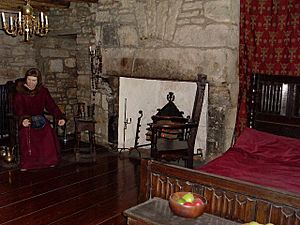 The Provand's Lordship of Glasgow, Scotland, is a medieval historic house museum located at the top of Castle Street within sight of the Glasgow Cathedral and Glasgow Royal Infirmary, and next to the St Mungo Museum of Religious Life and Art.

Provand's Lordship was built as part of St Nicholas's Hospital by Andrew Muirhead, Bishop of Glasgow in 1471. A western extension, designed by William Bryson, was completed in 1670.

In the early 19th century the house was occupied by a canon supported by income from the Lord of the Prebend (or "Provand") of Barlanark. Later that century it was acquired by the Morton Family who used it as a sweet shop. Following a generous donation Sir William Burrell, in the form of cash as well a collection of seventeenth-century Scottish furniture in the late 1920s, the house was bought by the specially-formed Provand's Lordship Society, whose aim was to protect it. In 1978, the building was acquired by the City of Glasgow who restored it. It was reopened to the public in 1983, and, following further restoration work which lasted two years, re-opened again in 2000.

All content from Kiddle encyclopedia articles (including the article images and facts) can be freely used under Attribution-ShareAlike license, unless stated otherwise. Cite this article:
Provand's Lordship Facts for Kids. Kiddle Encyclopedia.