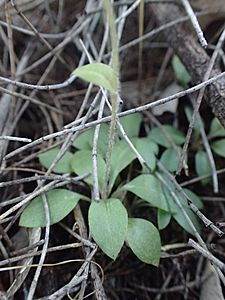 Pterostylis echinulata was first formally described in 2014 by David Jones and Christopher French from a specimen collected near Kulin and the description was published in Australian Orchid Review. The species had previously been known as Pterostylis sp. 'hairy leaf'. The specific epithet (echinulata) is a Latin word meaning "with very small prickles, alluding to the impression imparted by the siliceous cells present on the leaves, scape and ovary of this species".

The hairy-leafed snail orchid grows under small shrubs in open woodland in the Mallee biogeographic region.

Pterostylis echinulata is classified as "Priority One" by the Western Australian Government Department of Parks and Wildlife, meaning that it is known from only one or a few locations which are potentially at risk.

All content from Kiddle encyclopedia articles (including the article images and facts) can be freely used under Attribution-ShareAlike license, unless stated otherwise. Cite this article:
Pterostylis echinulata Facts for Kids. Kiddle Encyclopedia.