Pterostylis longifolia, commonly known as the common leafy greenhood or tall greenhood, is a plant in the orchid family Orchidaceae and is endemic to eastern Australia. Flowering plants have up to seven flowers which are green, partly transparent and which have a labellum which is pale green and hairy with a blackish central stripe. Non-flowering plants have a rosette of leaves but flowering plants lack the rosette, instead having five to eight stem leaves. A similar species, Pterostylis melagramma has paler green flowers which have a less hairy labellum. 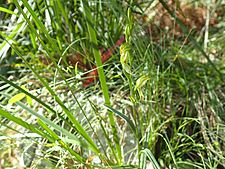 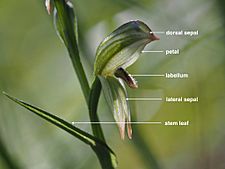 Pterostylis longifolia occurs in New South Wales and southern Queensland on the coast and tablelands, growing in forest and coastal scrub.

All content from Kiddle encyclopedia articles (including the article images and facts) can be freely used under Attribution-ShareAlike license, unless stated otherwise. Cite this article:
Pterostylis longifolia Facts for Kids. Kiddle Encyclopedia.