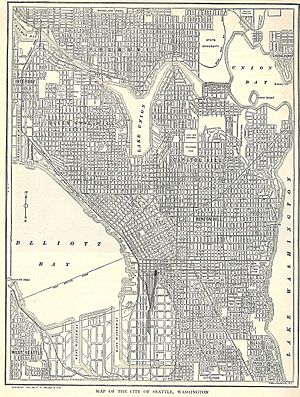 This 1911 map of Seattle shows the name Renton Hill slightly southeast of center.

Renton Hill was historically a neighborhood of Seattle, Washington, United States; it was roughly the southern part of today's Capitol Hill and the adjacent part of First Hill, centered roughly at 18th and Madison. It was named after lumberman and merchant Captain William Renton (1818-1891).

The Renton Hill Community Improvement Club was the city's first community club, organized in 1901 for public improvements such as water, sidewalks, lighting, and beautification. Along with the Capitol Hill Community Club, the club reorganized in 1929 to exclude racial minorities, using a restrictive covenant. This was in reaction to encroaching African American population from the east, Asian from the south, and urban downtown from the west. 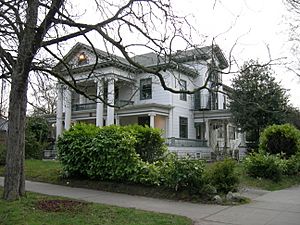 All content from Kiddle encyclopedia articles (including the article images and facts) can be freely used under Attribution-ShareAlike license, unless stated otherwise. Cite this article:
Renton Hill, Seattle Facts for Kids. Kiddle Encyclopedia.