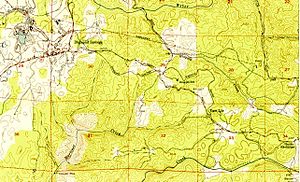 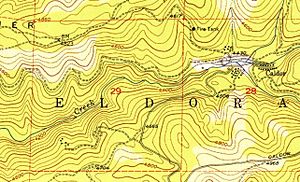 Eastern section of route to Caldor

The Diamond and Caldor Railway was a common carrier 3 ft (914 mm) narrow gauge railroad operating in El Dorado County, California, in the United States. The 34-mile railroad was primarily a logging railroad but also did some passenger service.

The railroad was constructed in 1904 and operations continued until abandonment commenced on April 10, 1953. The railroad primarily operated with Shay locomotives. The remaining Shays, with the exception of #4, were scrapped in 1953. Engine #4 was displayed at the El Dorado County Fairgrounds for several years and is now in the process of being restored by the El Dorado Western Railway Foundation.

The railroad operated between Diamond Springs, California (located near Placerville) and went east along the North Fork of the Cosumnes River and then to Caldor.

The railroad was a subsidiary of the California Door Company of Oakland. Before a 1923 fire destroyed the mill at Caldor, the line hauled rough-cut lumber from Caldor to the sash and door factory in Diamond Springs. After the company built a modern electric mill at Diamond Springs, the railroad hauled uncut logs from the woods to the new mill.

Because the Diamond & Caldor was a common carrier, it had to comply with Interstate Commerce Commission regulations. The railroad failed to comply with the ICC requirement to have railroad cars equipped with air brakes and automatic couplers. The Diamond and Caldor, according to railroad historian Donald B. Robertson, may be the only western railroad to be put out of business due to those equipment requirements.

All content from Kiddle encyclopedia articles (including the article images and facts) can be freely used under Attribution-ShareAlike license, unless stated otherwise. Cite this article:
Diamond and Caldor Railway Facts for Kids. Kiddle Encyclopedia.