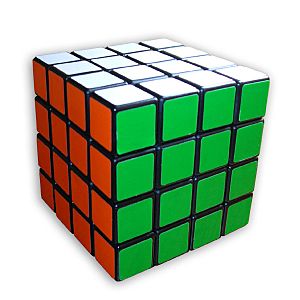 A Rubik's Revenge is a 4x4 Rubik's Cube. It has 24 centers, 24 edges, and 8 corners. It was made by Peter Sebestény. Unlike the Rubik's Cube, the centers can move to different places.

There are different ways to solve a Rubik's Revenge. One way is to solve the centers, and then the edges. Then, you can solve it like a 3x3. But, special problems can happen. 2 edges flipped wrong, or 2 sets of edges could be swapped from each other.

All content from Kiddle encyclopedia articles (including the article images and facts) can be freely used under Attribution-ShareAlike license, unless stated otherwise. Cite this article:
Rubik's Revenge Facts for Kids. Kiddle Encyclopedia.