The San Antonio Stock Show & Rodeo in San Antonio, Texas, USA has grown to be one of the largest events in the city with more than two million visitors each year. It is one of the top Professional Rodeo Cowboys Association (PRCA) rodeos in the nation. For 14 consecutive years it was awarded the PRCA Large Indoor Rodeo of the Year and attracts the world's best rodeo athletes and bucking stock. The event includes world-class entertainment, family-friendly educational activities and exhibits, a carnival, shopping, as well as horse and livestock shows. 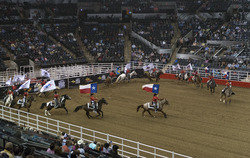 Opening of the rodeo.

While the establishment of the organization took place in 1949, the first rodeo occurred in 1950. Since then, the annual event takes place over three weeks in February.

The rodeo began in the Joe & Harry Freeman Coliseum until 2003 when its primary events moved into the AT&T Center. The adjacent Freeman Coliseum became available to add on-site access for retailers to sell western wear, furniture and other items during the annual rodeo. The San Antonio Spurs of the NBA, who share the AT&T Center with the Rodeo, goes on “The Rodeo Road Trip” during the three weeks of the rodeo.

The Western Heritage Parade & Cattle Drive is the kick-off for the San Antonio Stock Show & Rodeo and helps us celebrate our proud Texas heritage. The mile long route through the streets of downtown San Antonio features participants such as Fort Hood 1st Cavalry Division, Fort Sam Houston Caisson and of course, a herd of Texas Longhorns.

In the eight days preceding the start of the rodeo, the South Texas Trail Riders traverse 140 miles of back country roads on horses, mules, and wagons to set the theme for the forthcoming activities. Many of the riders routinely express regret when the trip is concluded because of the satisfaction they derived from being in the outdoors and engaged in the old way of living. One of the 2017 trail bosses, Becki Kosuh of Blanco, Texas, said that the ride connotes "heritage, culture, tradition, and family."

Hadley Barrett (1929-2017), for twenty-eight years the voice of the San Antonio Rodeo, had just completed announcing twenty-one rodeo performances a few days before he died of heart failure in Colorado on March 2, 2017. According to the San Antonio Express-News, Barrett was known for his "distinctive voice and folksy blend of cornball jokes, faith, patriotism, and rodeo wisdom." A native of North Platte, Nebraska, Barrett was reared on a ranch, was a weekend bull-rider, and a traveling musician who with his brothers under the name Hadley Barrett and the Westerners performed with, among others, Carl Perkins and Little Jimmy Dickens. He also announced for other rodeos, the Calgary Stampede, the Canadian Finals, and Cheyenne Frontier Days in Wyoming.

2021 saw the carnival & charreada part go on hiatus, but others will go on caused by COVID-19 pandemic. Strict measures will be undertaken, such as wearing masks & social distancing.

The San Antonio Livestock Exposition, Inc. was established with the mission "A volunteer organization that emphasizes agriculture and education to develop the youth of Texas". The focus on educating the youth of Texas lead to integrating 4-H and FFA high school students and making educational commitments to support their interest in the agricultural and livestock industry. In 1984, the scholarship program began when fifteen, four-year scholarships totaling $90,000 to were awarded to students entering Texas colleges in the fall. Since then, the organization has committed more than $186 million to the youth of Texas through scholarships, grants, endowments, junior livestock auctions, youth western art auction, calf scramble program and show premiums.

Production of the event requires over 6,000 volunteers.