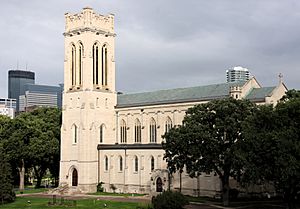 Saint Mark's Episcopal Cathedral in Minneapolis is one of two cathedrals in the Episcopal Church in Minnesota. The church was founded in 1858 and designated as a cathedral in 1941. Its current building dates from 1910. 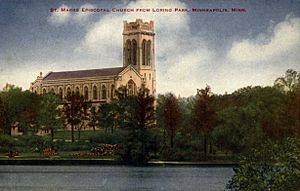 St. Mark’s Church was founded in 1858 as a mission of Gethsemane in downtown Minneapolis. It was first located in North Minneapolis at Washington Avenue and 27th Avenue North. In 1863 the original building was moved to the city center (4th Street and Hennepin Avenue) on a sled pulled by oxen. It was incorporated as a parish on June 19, 1868, and occupied a new building on 6th Street between Hennepin and Nicollet Avenues from 1870 to 1908. Today's St. Mark's, designed by architect Edwin Hawley Hewitt (who was a parishioner), was built in 1910 on Hennepin Avenue overlooking Loring Park. The cornerstone was laid on November 15, 1908, and the Parish House was built first, with enough space to serve for worship while the actual church structure was being erected next to it. By the late 1930s, Bishop Samuel Cook Edsall had moved his residence to Minneapolis from the Cathedral of Our Merciful Saviour in Faribault, and had begun referring to St. Mark's as a "Pro-Cathedral". St. Mark's was officially designated the diocesan cathedral in 1941; the Cathedral of Our Merciful Saviour retained its cathedral status as "the historic cathedral". 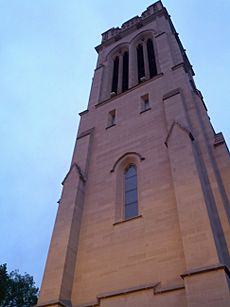 Three General Conventions of the Episcopal Church have been held in Minnesota.

General Convention met in Minneapolis next in 1976, again, with some events at St. Mark's. That General Convention officially accepted the ordination of women as priests and adopted the current Book of Common Prayer used in the United States.

St. Mark's once more hosted some events at the 2003 General Convention in Minneapolis, at which the election of the Rev. V. Gene Robinson as Bishop of the Diocese of New Hampshire was confirmed, making him the Episcopal Church's first openly gay, noncelibate bishop.

All content from Kiddle encyclopedia articles (including the article images and facts) can be freely used under Attribution-ShareAlike license, unless stated otherwise. Cite this article:
St. Mark's Episcopal Cathedral (Minneapolis) Facts for Kids. Kiddle Encyclopedia.