St. Mary & All Saints’ Church in Dale Street, Palfrey was built in 1901 to 1902 designed by J. E. K. and J. P. Cutts of London. It replaced a former mission church built of corrugated iron in 1893 which became too small for the parishioners. The church is of red brick and consists of a chancel, a nave, a north chapel, a south chapel, an organ, and sacristy. The east window was added in 1926 as a war memorial. Due to falling attendances the Church closed for worship in 1999 and ceased as a Parish in 2002. It is now the Orthodox Church of the Nativity of the Mother of God.

The eagle lectern formerly of this Church is now relocated in the Lady Chapel at St Gabriel's Church, Fullbrook. The Reredos are now located at St Stephen's Wolverhampton. The role of honour is still located in the building today. The stations of the cross are at The Church of the Annunciation, Yew Tree, Walsall. 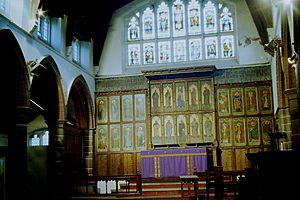 St Mary & All Saints Palfrey Reredos which now are in St Stephen, Wolverhampton.