Stockings (also known as hose, especially in a historical context) are close-fitting, variously elastic garments covering the leg from the foot up to the knee or possibly part or all of the thigh. Stockings vary in color, design, and transparency. Today, stockings are primarily worn for fashion and aesthetics, usually in association with mid-length or short skirts. 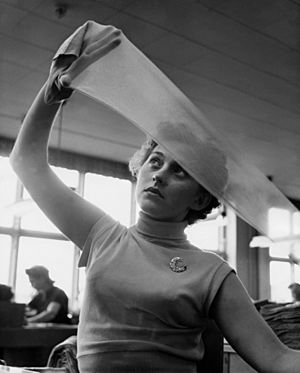 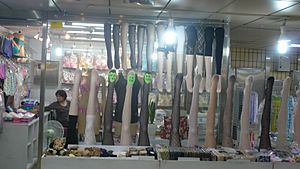 Stockings on display for sale in South Korea.

Historically, even though the word sock is at least as ancient in origin, what men normally wore were often referred to as stockings, probably especially when referring to longer hose. The word stock used to refer to the bottom "stump" part of the body, and by analogy the word was used to refer to the one-piece covering of the lower trunk and limbs of the 15th century—essentially tights consisting of the upper-stocks (later to be worn separately as knee breeches) and nether-stocks (later to be worn separately as stockings). (See Hose.)

Before the 1590s, stockings were made of woven cloth. The first knitting machines were for making stockings. The stockings themselves were made of cotton, linen, wool or silk. A polished cotton called lisle was common, as were those made in the town of Balbriggan.

Before the 1920s, stockings, if worn, were worn for warmth. Women, particularly during the pioneer days, wore long underwear (longjohns) underneath their long dresses. In the 1920s, as hemlines of dresses rose, and churches were not heated, women began to wear flesh-colored stockings over their longjohns to cover their exposed legs. Those stockings were sheer, first made of silk or rayon (then known as "artificial silk") and after 1940 of nylon. 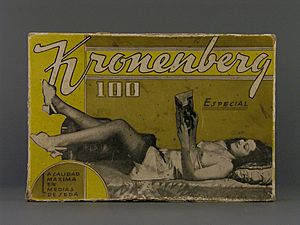 The introduction of nylon in 1939 by chemical company DuPont began a high demand for stockings in the United States with up to 4 million pairs being purchased in one day. Nylon stockings were cheap, durable, and sheer compared to their cotton and silk counterparts. When America entered World War II, DuPont ceased production of nylon stockings and retooled their factories to produce parachutes, airplane cords, and rope. This led to a shortage and the creation of a black market for stockings. At the end of the war DuPont announced that the company would return to producing stockings, but could not meet demand. This led to a series of disturbances in American stores known as the nylon riots until DuPont was able to ramp up production.

A precursor of pantyhose made an appearance in the 1940s and 1950s, when film and theater productions had stockings sewn to the briefs of actresses and dancers, according to actress-singer-dancer Ann Miller and seen in popular films such as Daddy Long Legs. Today, stockings are commonly made using knitted wool, silk, cotton or nylon (see hosiery). The introduction of commercial pantyhose in 1959 gave an alternative to stockings, and the use of stockings declined dramatically. A main reason for this was the trend towards higher hemlines on dresses (see minidress). In 1970, U.S. sales of pantyhose exceeded stockings for the first time, and has remained this way ever since. Beginning in 1987, sales of pantyhose started a slight decline due to the newly invented hold-ups, but still remain the most sold kind of hosiery.

Stockings are still sometimes preferred to pantyhose for a number of reasons. These may include the perception that stockings, and the associated use of garters, lace, high fashion, appliqué and the exposure of the thigh, are more aesthetically pleasing, or sexually attractive and alluring than pantyhose.

Both nylon stockings and pantyhose in being sheer share the advantage of being quick-drying compared to pants. Spare pairs are also easy to carry if they are ruined. If laddered they can be replaced 'one at a time' which provides a cost advantage over tights.

However, stockings have a drawback in colder weather, because more skin is exposed to the cold compared to pantyhose. Also, pantyhose do not require garters or garter belts, and do not need to be adjusted as much, whilst also leaving a smoother line under form-fitting clothing. 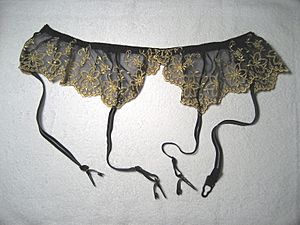 A garter belt with guipure lace

Stockings can be held up in one of three ways: 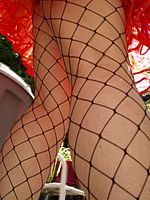 In modern usage, stocking specifically refers to the form of hosiery configured as two pieces, one for each leg (except for American and Australian English, where the term can also be a synonym for pantyhose). The terms hold-ups and thigh highs refer to stockings that stay up through the use of built-in elastic, while the word stockings is the general term or refers to the kind of stockings that need a suspender belt (garter belt, in American English), and are quite distinct from tights or pantyhose (American English).

All content from Kiddle encyclopedia articles (including the article images and facts) can be freely used under Attribution-ShareAlike license, unless stated otherwise. Cite this article:
Stocking Facts for Kids. Kiddle Encyclopedia.