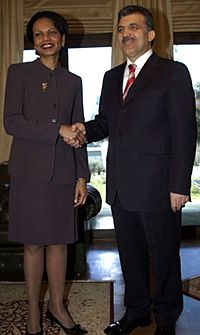 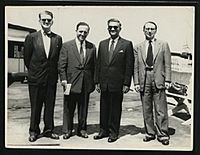 Otherwise (see man on right) the trousers drop slightly and spoil the effect
Not to be confused with dental braces.

Braces (suspenders in the U.S.) are a standard item of male clothing, now worn less often than before. Their function is to keep trousers at a set height on the body. They are standard wear for formal styles of dress such as the lounge suit.

There is also a fashion use among some young males, and a use by some workmen. Braces can be worn entirely out of sight, hidden by a waistcoat, or in sight as a display. A critical factor in formal dress is the "drop" of the trousers as they meet the shoes. Here braces avoid the need to hitch trousers up, always a problem with belts.

In many countries braces were worn by all classes of men for well over a hundred years until about the 1960s, except in the armed forces. Then fashion changed and men's clothes became informal, with lower waistlines and belts. Now they are a minority item.

All content from Kiddle encyclopedia articles (including the article images and facts) can be freely used under Attribution-ShareAlike license, unless stated otherwise. Cite this article:
Braces Facts for Kids. Kiddle Encyclopedia.