Tò he facts for kids 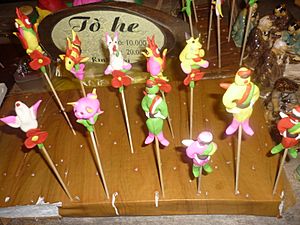 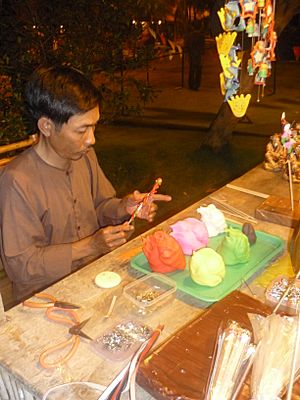 A tò he craftsman at work 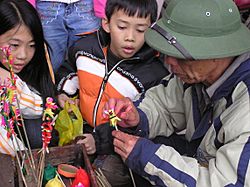 A tò he craftsman with children.

Tò he (toy figurine) is a traditional toy for children in Vietnam which is made from glutinous rice powder in form of edible figurine such as animals, flowers or characters in folk stories. In the past, tò he was made and sold only on the occasion of festivals, especially the Tết and the Trung Thu which are the favorite festivals of Vietnamese children. Nowadays, the toy is introduced in almost all traditional festivals and in public places like parks or gardens. As tò he is one of the rare surviving traditional toys of Vietnam, the art of tò he making is considered a cultural ambassador of Vietnam and there are many efforts in order to preserve and develop this traditional art.

To create a tò he figurine, the craftsman needs a mixture of glutinous and ordinary rice powders which is easily to knead into different shapes and edible for children, bamboo sticks to plant the shaped tò he and his own skill in graphic depicting. Modeled by the hand of the craftsmen, the forms of tò he figurine are drawn from animals, flowers and characters in folk stories such as Tôn Ngộ Không, the Monkey King in Journey to the West. There are seven basic colours of tò he figurines which are green, sea blue, red, purple, yellow, white and black, those colours come from rice powder mixed with food dyes which are used to replace colours from trees or ashes in order to ensure the edibleness of tò he. In the past, tò he was steamed after being kneaded but today the figurines are made directly from preboiled paste so that the craftsman can reduce the time for making one tò he figurine. The paste is made from glutinous and ordinary rice powders, it was kneaded with fresh water before dropped in boiling water for one hour and finally dyed with food colour.

The procedure of tò he making requires utmost patience from the craftsman, but almost all tò he makers are men and there is an unwritten law in families of tò he craftsmen that secret in making tò he is only passed from father to sons and daughters-in-law, not to daughters. There are no lesson of tò he making, sons are transmitted the skill from their father solely in watching and self-learning. Nevertheless, nowadays tò he making is also taught to the handicapped so that they can live on making tò he and other forms of traditional art.

All content from Kiddle encyclopedia articles (including the article images and facts) can be freely used under Attribution-ShareAlike license, unless stated otherwise. Cite this article:
Tò he Facts for Kids. Kiddle Encyclopedia.