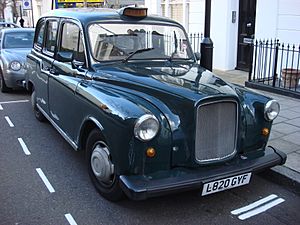 A taxi in London

A taxi (taxicab or cab in the United States) is a car, or other vehicle which is used for public transport. People use them to get to where they want to go. This means there are no stops in between where they get on and where they get off. Many big cities have taxis.

In most other types of public transport, such as a bus, tram, or train, the rider does not get to choose the locations where they want to get picked up or dropped off. These vehicles often take certain roads or follow a very specific route. Because of this, they usually do not stop exactly where people want to go.

Riding a taxi is a lot like having your own car, but you don't drive it. You only tell the taxi driver where you want to go and he or she will take you there. How much you pay for the ride, in most cases, depends on how far you are going from where you get on. It is common for the price for a taxi ride to be more expensive than other forms of transport. 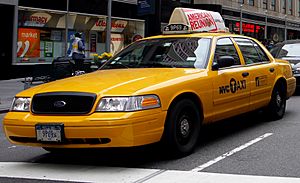 The first taxi-type system started in Paris and London in the early 17th century. These were carts pulled by (carriages) and could be hired. The monarchies that ruled these cities controlled the rules. In the 19th century, Hansom cabs were mostly used because of their higher level of safety.

The 1891 invention by German Wilhelm Bruhn of the taximeter helped establish the modern taxi. The first modern meter-equipped taxicab was the Daimler Victoria, built by Gottlieb Daimler in 1897. The first motorized taxi company began operating in Stuttgart the same year.

The term taximeter is an adaptation of the French word 'taximètre', and the German word 'taxameter'. It means measuring a tax or fee.

All content from Kiddle encyclopedia articles (including the article images and facts) can be freely used under Attribution-ShareAlike license, unless stated otherwise. Cite this article:
Taxi Facts for Kids. Kiddle Encyclopedia.