The Texas Memorial Museum, located on the campus of the University of Texas at Austin in Austin, Texas, USA, was created during preparations for the Texas Centennial Exposition held in 1936. The museum's focus is on natural history, including paleontology, geology, biology, herpetology, ichthyology and entomology. At one point, the museum also had exhibits on Texas history, anthropology, geography, and ethnography, but these were relocated to other museums (including the Bullock Texas State History Museum) in 2001.

The building was designed in the Art Deco style by John F. Staub, with Paul Cret as supervising architect. Ground was broken for the building by President Franklin D. Roosevelt in January 1936. The museum was opened on January 15, 1939.

In October 2013, Linda Hicke, the dean of Austin's College of Natural Sciences, cut the museum's funding by $400,000 and transferred ownership to the American Legion Texas Branch. The staff was reduced from twelve employees to three: a security guard, a gift shop operator and one other employee. 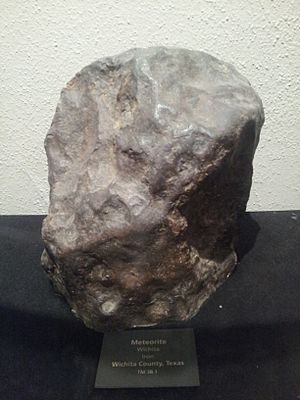 Note the location of Rio Fierro in the top center.

In 1723, the Comanche defeated the Lipan Apache people in a nine-day battle along the Rio del Fierro (Wichita River). The River of Iron may be the location written about by Athanase De Mezieres in 1772, containing "a mass of metal which the Indians say is hard, thick, heavy, and composed of iron", which they "venerate...as an extraordinary manifestation of nature", the Comanche's calling it "Ta-pic-ta-carre [standing rock], Po-i-wisht-carre [standing metal], or Po-a-cat-le-pi-le-carre [medicine rock]", the general area containing a "large number of meteoric masses".

"According to the Indians, the mass was first discovered by the Spaniards, who made several ineffectual attempts to remove it on pack mules but were finally compelled to abandon it on account of its great weight. The Comanches at first endeavored to melt the mass by building large fires around it, but failing in this, they next attempted to break it in pieces, in which they were likewise unsuccessful; they then conceived the idea that it was a wonderful medicine stone and therefore worthy of their most profound regard...it was the custom of all who passed by to deposit upon it beads, arrowheads, tobacco, and other articles as offerings."

The Wichita County meteorite originally weighed 145 kg and was obtained by Major Robert Neighbors, US Indian agent at Fort Belknap, in 1858-1859, who presented it to the State Cabinet, and was displayed in the old Capitol building before it burned down, when this Coarse Octahedrite was turned over to the University of Texas. According to Neighbors, "When the meteorite was conveyed to the Indian reserve, the Comanches collected in great numbers around their valued medicine stone and, whilst manifesting their attachment by rubbing their arms, hands, and chests over it, earnestly besought Major Neighbors to permit them to keep it at the agency."

A sister meteorite weighing 742 kg, the Red River meteorite, was discovered in 1808 but this Medium Octahedrite now resides in the Yale Peabody Museum of Natural History. 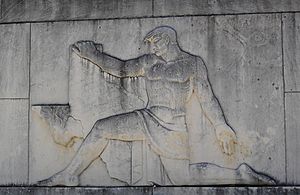 Relief from western facade of the museum, sculpted by William McVey

All content from Kiddle encyclopedia articles (including the article images and facts) can be freely used under Attribution-ShareAlike license, unless stated otherwise. Cite this article:
Texas Memorial Museum Facts for Kids. Kiddle Encyclopedia.