The Light (Leeds) facts for kids 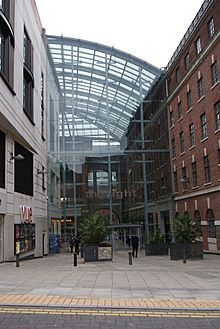 The northern entrance to The Light 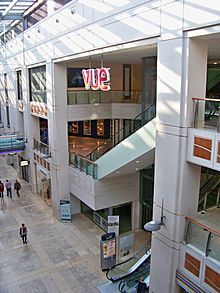 The Light is a leisure and retail centre in central Leeds, England. It is located along The Headrow. The building was constructed in 1930–31 as Permanent House, the headquarters of the Leeds Permanent Building Society; the society moved to new premises in at Lovell Park in the 1990s. The legacy of the building's original use is still evident in the architecture, and the Browns restaurant at The Light uses the former banking hall.

Following a period in the 1990s when Permanent House was used as offices for Leeds City Council, the site was redeveloped, and this involved a demolition that involved the 61-metres-tall Leeds Permanent tower and other annexes which were constructed in the 1960s.

The Light opened in 2001 and it has a retail area of 32,515 square metres and targets a high spender customer base. It contains one of Leeds' two city-centre cinemas, a 14-screen multiplex cinema operated by Vue (formerly Ster Century). Also within The Light there are a number of restaurants such as Nando's and Cafe Rouge, designer shops including Ark, a Virgin Active health club, a Radisson Blu 4-star hotel and an NHS drop in centre. The Light also has a multi-storey car park. The Light has also hosted a number of special events, such as "City Beach","Meet the stylist" its annual "Night of Indulgence" in December.

Retail stores in The Light include Predator Nutrition, a sports nutrition company.

The Elite Club is The Light's free loyalty scheme which offers member discounts and offers throughout the centre. This has been running since The Light opened and has proved to be popular, with many shops and restaurants regularly offering special deals.

The Light has its own magazine "Light Style" which is produced three times a year. It gives customers information about what's happening in the centre as well as having information on fashion dining and competitions.

The Light has been developed in such a way that shows the original building in most parts, so much that the building's fascia along The Headrow has hardly changed since the original structure was opened in 1931. The redevelopment of 'The Light involved the incorporation of Fountain Street into the development. Since opening the tenants in the centre have remained fairly consistent.

All content from Kiddle encyclopedia articles (including the article images and facts) can be freely used under Attribution-ShareAlike license, unless stated otherwise. Cite this article:
The Light (Leeds) Facts for Kids. Kiddle Encyclopedia.