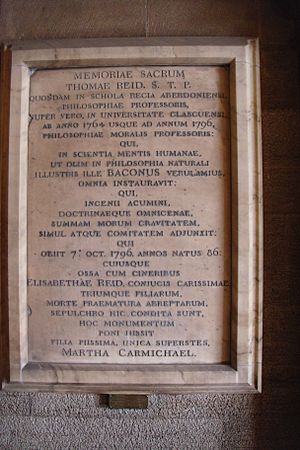 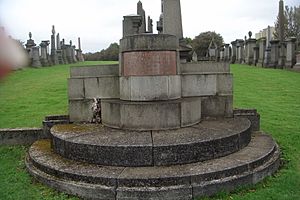 The Professors' Monument in Glasgow Necropolis where Reid's remains were placed. 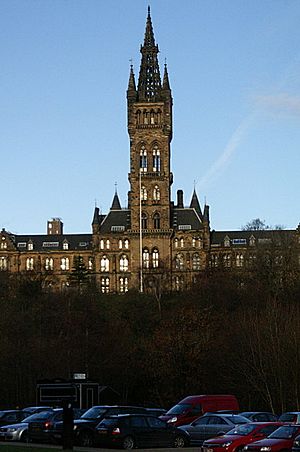 Thomas Reid D.D. (1710–1796), was Professor of Moral Philosophy at the University of Glasgow and founder of the Scottish common sense movement in philosophy. Remarkably, his tombstone is to be found in the vestibule of the main building of Glasgow University and directly under the 85m (278 feet) high tower of the Gilbert Scott Building. Reid’s remains were originally laid in Blackfriars Church burial-ground, on the grounds of Glasgow College in the High Street, Glasgow. The tombstone was removed when the College moved to Gilmorehill in 1870. It was placed in its present position when the building of the Tower above it was begun, thus forming a fitting ‘monument’ to Reid. In comparison, the Scott Monument in Edinburgh is only 200.5 feet (61.1 m).

Tombstone inscription may be translated as follows:

Sacred to the memory of Thomas Reid, S.T.P., formerly Professor of Philosophy at King’s College, Aberdeen; more recently Professor of Moral Philosophy in the University of Glasgow, from the year 1764 to the year 1796; who renewed everything in the science of the human mind, as once the distinguished Lord Bacon of St. Albans did in natural philosophy; who combined sharpness of mind, all kinds of learning, utmost seriousness of character, and likewise kindness; who died 7th October, 1796, at the age of 86, and whose bones together with the ashes of Elizabeth Reid, his much loved wife, and three daughters carried off by premature death, are buried here in this tomb. The erection of this monument was ordered by his most affectionate, and only surviving daughter, Martha Carmichael.

The full Latin inscription is as follows:

When the Glasgow College buildings in the High Street were demolished, Reid’s remains were placed with those of other professors and their families in the Professors’ Monument in the Glasgow Necropolis near Glasgow Cathedral. The Monument is at the south end of the sixth row of monuments from the eastern end of the cemetery, and overlooking Reid’s home in Drygate. It has the following inscription: "In memory of Professors of the University of Glasgow and members of their family whose bodies were interred in Blackfriars Churchyard and removed here in 1876."

All content from Kiddle encyclopedia articles (including the article images and facts) can be freely used under Attribution-ShareAlike license, unless stated otherwise. Cite this article:
Thomas Reid's tombstone Facts for Kids. Kiddle Encyclopedia.