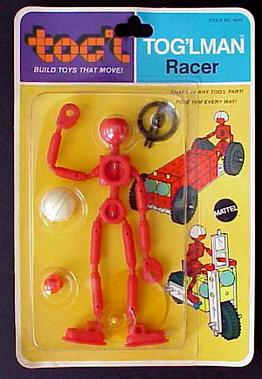 Tog'l was a construction set produced by Mattel from 1968 through 1970, similar in concept to Lego.

At its core was a cube-shaped building block called a "Tog'l Block". Each side of the block had a hole or a pin that could be used to connect to the corresponding element (pins snapped into holes) on the side of another block. A chief advantage of Tog'l blocks over Lego (and similar) bricks is that a Lego brick can only attach to other bricks on two of its faces (top or bottom), while Tog'l blocks could attach to others on all six of its faces (each of its six faces could attach to another block).

Another feature that gave the product its name was that one side had a hinge that allowed models built with Tog'l blocks to flex and move. Other building elements included wheels, axles, pinion gears, tubes, girders, air bellows, windows, doors, blue pins, green "hemisphere" pins, red double pins, clown heads, pig heads, hands, feet, and many other variations with generic uses or specific purposes.

There were optionally two types of motors to make the toys move. Both a wind-up motor and a rubber band "elasti-motor" were available for separate purchase. The wind-up motor ran longer, but the elasti-motor ran faster.

Toward the end of its run a 6-inch tall bendable figure was added called "Tog'lman" that came in three colors: blue (engineer), green (fireman) and red (racer). Tog'lman was similar in scale and flexibility to another Mattel toy, Major Matt Mason.

All content from Kiddle encyclopedia articles (including the article images and facts) can be freely used under Attribution-ShareAlike license, unless stated otherwise. Cite this article:
Tog'l Facts for Kids. Kiddle Encyclopedia.