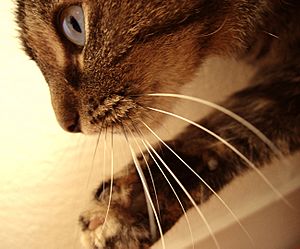 A whisker is a long, thick hair around the mouth of some animals, mostly mammals such as cats and mice, that the animal uses to feel its surroundings. Some animals, such as cats, also have whiskers above their eyes and on the backs of their legs. Unlike other hair, whiskers should never be cut or trimmed, as this can confuse the animal.

Whiskers can also mean a beard or mustache.

All content from Kiddle encyclopedia articles (including the article images and facts) can be freely used under Attribution-ShareAlike license, unless stated otherwise. Cite this article:
Whisker Facts for Kids. Kiddle Encyclopedia.