Wright's Flour Mill is located at Wharf Road Ponders End which is part of the London Borough of Enfield. It is Enfield's oldest working industrial building. 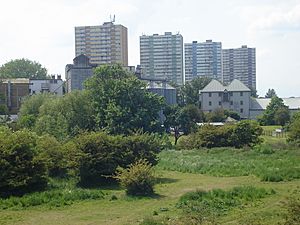 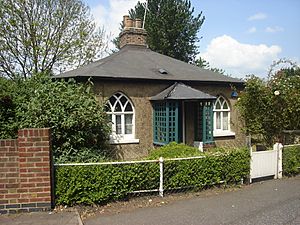 Some of the present buildings date back to 1789 and include the brick Georgian miller's house and offices flanking a 3½-storey watermill of brick and white weatherboarding. There has been a mill here since at least the late 16th century and possibly Domesday. George Reynolds Wright took full control of the mill in 1870. Originally powered by a back water of the River Lea. In 1913 owing to construction work at the nearby King George V Reservoir the water supply which powered the millstones was cut off. The machinery was then converted to electricity. Since then further improvements have been made.

All content from Kiddle encyclopedia articles (including the article images and facts) can be freely used under Attribution-ShareAlike license, unless stated otherwise. Cite this article:
Wright's Flour Mill Facts for Kids. Kiddle Encyclopedia.