11 East Forsyth, formerly known as the Lynch Building and the American Heritage Life Building, is a historic structure in Jacksonville, Florida. Originally developed by Stephen Andrew Lynch, as its current name suggests, it is located at 11 East Forsyth Street in Downtown Jacksonville. On December 23, 2003, it was added to the U.S. National Register of Historic Places.

Vestcor invested more than $24 million to restore the building's exterior and transform the former offices into loft apartments, which tenants began to occupy during 2003. 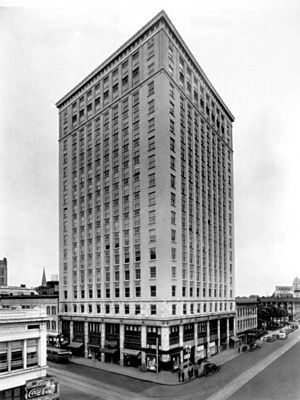 The 17-story, 153,000 sq ft (14,200 m2) building originally contained commercial offices and was opened by entrepreneur and film pioneer Stephen Andrew Lynch. It was designed by architects Pringle & Smith in 1926 in the Chicago School style. It was constructed with limestone, marble and a facade of brick; the top of the structure contained a capital of terra-cotta. When it opened in 1926, it was Jacksonville's second tallest building, one floor less than the Barnett National Bank Building.

Jacksonville developer Vestcor began a historic preservation of the building in 2002 after obtaining a $17.8 million, 1.5% interest, 20-year loan from the city of Jacksonville. The company restored many architectural features including polychromatic terra-cotta panels, decorative ceilings and steel panels. Elevators, HVAC, electrical, plumbing and other infrastructure was modernized and a six-story parking garage was constructed adjacent to the building. The second floor was converted into a large community club room, a fitness center and a media room. Modern amenities were added while respecting the historic integrity of the structure. The building was renamed to "11 East Forsyth" and 127 apartments were opened in 2003 after $24 million and a year of construction. A Starbucks coffee bistro opened, but subsequently closed, leaving no tenants in the 4,500 sq ft (420 m2) of first-floor commercial space.

In late December 2009, Vestcor requested a modification to their loan terms, citing three years of operating losses at 11 East and their other renovated building, The Carling. The company asked for three years of interest-only payments plus low interest loans to potential tenants for the empty commercial space at 11 East. Three months later, the city approved the plan for principal deferral but took no action on tenant loans.

All content from Kiddle encyclopedia articles (including the article images and facts) can be freely used under Attribution-ShareAlike license, unless stated otherwise. Cite this article:
11 East Forsyth Facts for Kids. Kiddle Encyclopedia.