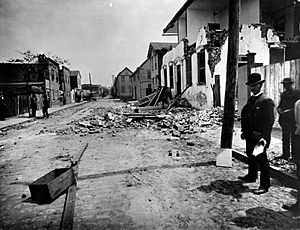 Damage done to Tradd Street, after the earthquake of 1886 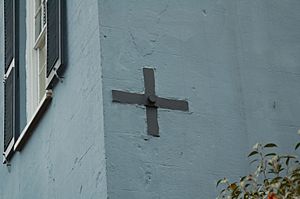 One of the many "earthquake bolts" found in Charleston houses of the time.

The 1886 Charleston earthquake took place around 9:50 pm local time on August 31 with an estimated moment magnitude between 6.9 and 7.3. The quake caused 60 deaths and damage between five and six million dollars to just over 2,000 buildings in the Southeastern United States. At the time, about 49.000 people lived in Charleston. Before the earthquake, there had been very little or no historical earthquake activity in the Charleston, South Carolina area. That is unusual. As of 2020, the reasons for the earthquake are not fully known.

The shock was felt as far away as Boston, Massachusetts, as far northwest as Chicago, Illinois and Milwaukee, Wisconsin, as far west as New Orleans, Louisiana and as far south as Cuba.

Within Charleston, almost all the buildings were damaged. Most were demolished and rebuilt.

Earthqake bolts (anchor plates) were added to unreinforced masonry buildings to add support to the structure without having to demolish the building due to instability. The bolts pass through existing masonry walls tying the walls on opposite sides together for stability.

All content from Kiddle encyclopedia articles (including the article images and facts) can be freely used under Attribution-ShareAlike license, unless stated otherwise. Cite this article:
1886 Charleston earthquake Facts for Kids. Kiddle Encyclopedia.