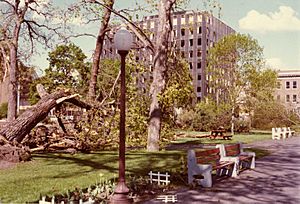 The 1980 Kalamazoo tornado was a natural disaster in Michigan in the United States on May 13, 1980.

Tuesday, May 13, 1980 began with temperatures in the upper 50s with fog. By 3:00 p.m., A warm front lifted north of the city, and thunderstorms began developing later that afternoon. By 3:30 p.m., A thunderstorm rapidly intensified, so the National Weather Service issued a severe thunderstorm warning.

The first tornado began around 3:40 p.m. and dissipated at 3:50 p.m. The first tornado did not cause any deaths but injured 25 people. Shortly after the first tornado dissipated, a supercell thunderstorm caused a new tornado to form as it was moving into Kalamazoo. The first images were captured by two news reporters in the city, where shortly thereafter caused its first fatality. As the tornado moved into downtown, an employee at a local electronics store captured it. The tornado could be seen moving southeast, damaging homes and uprooting trees as it moved into downtown. As the employee ran to the basement, the tornado killed three more people, two at Gilmore's Apartment Store and a motorcyclist struck by a falling tree. The tornado killed one more person in Constock Township before dissipating.

All content from Kiddle encyclopedia articles (including the article images and facts) can be freely used under Attribution-ShareAlike license, unless stated otherwise. Cite this article:
1980 Kalamazoo tornado Facts for Kids. Kiddle Encyclopedia.