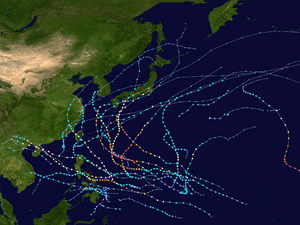 The 2014 Pacific typhoon season was an event that began on January 10, 2014 and ended on January 1, 2015. It was based on typhoons coming to the coasts of countries around the Pacific Ocean. The storms that have formed during the period are listed below:

All content from Kiddle encyclopedia articles (including the article images and facts) can be freely used under Attribution-ShareAlike license, unless stated otherwise. Cite this article:
2014 Pacific typhoon season Facts for Kids. Kiddle Encyclopedia.