34-40 King Street is a heritage-listed row of terraced houses in East Maitland, City of Maitland, New South Wales, Australia. It was added to the New South Wales State Heritage Register on 2 April 1999.

It consists of a row of single-storey stone terraces in the Colonial Georgian style with corrugated iron hipped roofs.

The City of Maitland describes it as an "exceptional and relatively rare example in New South Wales of a small-scale nineteenth-century single-storey terrace row, and notes that it "represents the earliest phases of the town's residential development and a tangible record of the lifestyle of the working class in the mid-nineteenth century". 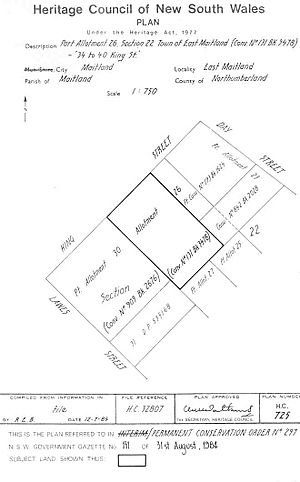 All content from Kiddle encyclopedia articles (including the article images and facts) can be freely used under Attribution-ShareAlike license, unless stated otherwise. Cite this article:
34-40 King Street, East Maitland Facts for Kids. Kiddle Encyclopedia.