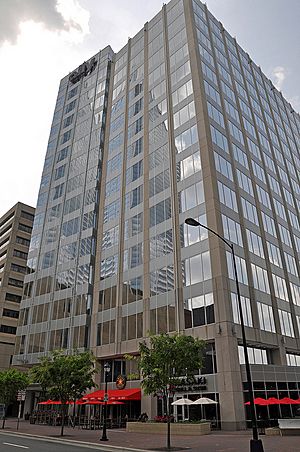 440 South Church also known as the Ally Center is a 15-story skyscraper in Charlotte, North Carolina with 368,000 square feet (34,200 m2) of space. Smallwood, Reynolds, Stewart, Stewart & Associates designed the building, and Bovis Lend Lease was the general contractor. Major tenants are Ally Financial and HDR. It was built according to LEED gold standards, making it a green building.

On June 19, 2008, Novare Group and Trinity Capital Advisors broke ground on the $78 million 440 South Church project and opened a sales office for Catalyst, a 27-story condominium project, both on the same 5.2-acre (21,000 m2) site between Third Street and Martin Luther King, Jr. Boulevard in uptown Charlotte. HDR, an architectural and engineering firm with 140 Charlotte employees, became the first tenant with plans for 45,000 square feet (4,200 m2) of space. The "topping out" ceremony took place March 6, 2009.

In April 2009, GMAC Financial Services, now Ally Financial, announced plans to move its corporate center from Ballantyne to 106,525 square feet (9,896.5 m2) on four floors of 440 South Church, with possible expansion later. At the time, GMAC had 265 Charlotte employees in three business units, with plans to cut as many as 60 jobs. However, 30 new sales jobs and 236 new jobs at the corporate center meant a net increase of 200 jobs. By creating the jobs and keeping them for nine years, GMAC would receive $4.5 million in incentives from the state of North Carolina. Charlotte had many employees with banking knowledge who had been laid off from Wachovia and Bank of America, and GMAC Financial CEO Al de Molina, who spent 17 years at Bank of America, lived in Charlotte. The GMAC headquarters, however, remained in Detroit.

Novare kept its investment, but was dropped as an operating partner because the company had significant debts that could result in foreclosures, and auditor Deloitte had "substantial doubt about the company’s ability to continue as a going concern."

All content from Kiddle encyclopedia articles (including the article images and facts) can be freely used under Attribution-ShareAlike license, unless stated otherwise. Cite this article:
440 South Church Facts for Kids. Kiddle Encyclopedia.