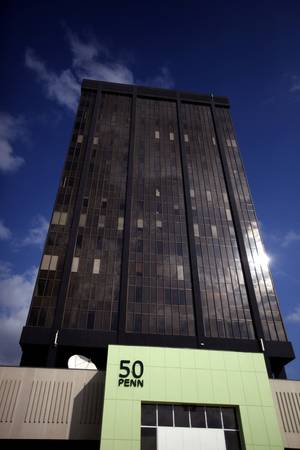 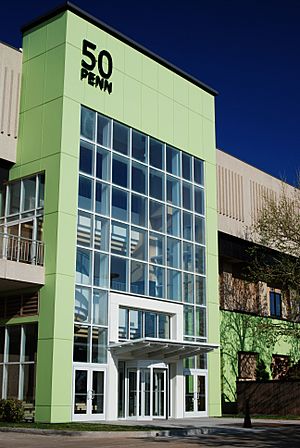 The ground floor entrance to the retail portion of the mall. 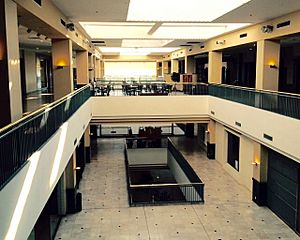 Another interior shot of the mall. 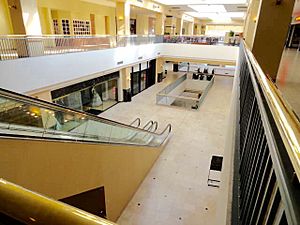 The interior of the mall. 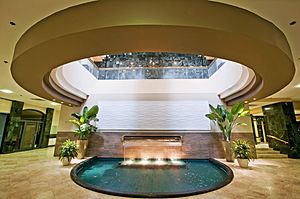 The fountain inside the office tower of 50 Penn Place, Oklahoma City, OK.

The complex was built in 1973 by C.W. Cameron, founder of American Fidelity. For the next twenty years it was a landmark due to four red piggy bank signs (One on all four sides of the Elevator tower on top of the building.) with a big "S" in the center, belonging to Sooner Federal Savings and Loan who had their home offices in the Building at the time. It was also formerly home to a couple of Oklahoma locally owned chain of high end retail stores such as Balliets a women's boutique and the flagship store of Orbach's which closed in 1990. Although not currently anchored by a major retailer, 50 Penn Place still has upscale shops and restaurants, a brewpub, independent bookstore, the 50 Penn Place Art Gallery, and various office tenants including LexisNexis. In recent years, the retail portion of the complex has lost the majority of its tenants to other nearby shopping venues, such as Penn Square Mall right across the street, and Classen Curve a newly built modern upscale shopping center in Nichols Hills. Because of this, 50 Penn Place is no longer seen by locals as an upscale shopping destination. However, several upscale tenants still remain, and former retail space is being leased to other tenants, such as ITT Technical Institute. In March 2011, In-Rel Properties purchased the building for $15.25 million and invested over $1 million in renovations. [1]

All content from Kiddle encyclopedia articles (including the article images and facts) can be freely used under Attribution-ShareAlike license, unless stated otherwise. Cite this article:
50 Penn Place Facts for Kids. Kiddle Encyclopedia.