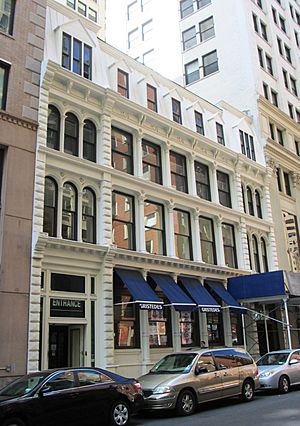 90–94 Maiden Lane is a cast-iron building on Gold Street between William and Pearl Streets in the Financial District of Manhattan, New York City. It was built in 1870-71 in the French Second Empire style and is attributed to Charles Wright.

It has a cast-iron facade from Daniel D. Badger's Architectural Iron Works, and is one of the few surviving examples of cast-iron architecture between Fulton Street and the Battery, as well as one of a few mid-19th century commercial buildings extant in Lower Manhattan. The building's facade was commissioned by Roosevelt & Son, the leading plate glass and mirror importer. Theodore Roosevelt Sr., father of U.S. President Theodore Roosevelt, was one of the company's principals. Unlike most other buildings of its sort, it has not been converted into condominium apartments, and is still in use as a commercial building.

The building was designated a New York City landmark on August 1, 1989.

All content from Kiddle encyclopedia articles (including the article images and facts) can be freely used under Attribution-ShareAlike license, unless stated otherwise. Cite this article:
90–94 Maiden Lane Facts for Kids. Kiddle Encyclopedia.