Theodore Roosevelt was born on October 27, 1858, in New York City. He was curious as a child, so he took up studying animals. He also took up boxing. He went to college at Harvard. He married twice, first to Alice Hathaway Lee and later to Edith Kermit Carow. He had six children: Alice, Theodore Jr., Kermit, Ethel, Archie and Quentin.

After spending time in North Dakota, Roosevelt was elected into the New York State Legislature, and served, as a Civil Service Commissioner and New York City police commissioner (a non-police officer who is in charge of making the police department run smoothly). In 1897, he was appointed Assistant Secretary of the Navy, but gave up on that to fight in the Spanish American War.

Roosevelt became Governor of New York, then Vice-President. After William McKinley was shot and killed, he became President of the United States.

Roosevelt joined the US Army in the Spanish-American War. He was a Lieutenant Colonel in the 1st U. S. Volunteer Cavalry. These horsemen were called the "Roughriders".

For his actions during the war, Roosevelt was recommended for the Medal of Honor.

In 2001, Theodore Roosevelt became the first President to receive the Medal of Honor.

Roosevelt's Medal of Honor recognized his conduct in frontline fighting in Cuba in 1898.

The words of Roosevelt's citation explain:

Lieutenant Colonel Theodore Roosevelt distinguished himself by acts of bravery on 1 July 1898, near Santiago de Cuba, Republic of Cuba, while leading a daring charge up San Juan Hill. Lieutenant Colonel Roosevelt, in total disregard for his personal safety, and accompanied by only four or five men, led a desperate and gallant charge up San Juan Hill, encouraging his troops to continue the assault through withering enemy fire over open countryside. Facing the enemy's heavy fire, he displayed extraordinary bravery throughout the charge, and was the first to reach the enemy trenches, where he quickly killed one of the enemy with his pistol, allowing his men to continue the assault. His leadership and valor turned the tide in the Battle for San Juan Hill. Lieutenant Colonel Roosevelt's extraordinary heroism and devotion to duty are in keeping with the highest traditions of military service and reflect great credit upon himself, his unit, and the United States Army.

As President, Roosevelt worked to make the U.S. a world power, or one of the most powerful countries in the world. His foreign policy was described by an African proverb as "Speak softly and carry a big stick". He increased the size of the United States' navy and sent all of the ships across the world to demonstrate to other countries that the United States is now a world power.

He continued the Monroe Doctrine and used the country's military might to influence Latin American politics. He had the Panama Canal built (which allowed ships to travel in less time by taking a shortcut). As president, he was interested in what happened in other countries. In 1905, he helped end the war between the Russian and Japanese empires. He won a Nobel Peace Prize for it in 1906.

At home, he fought for all Americans having a "Square Deal", meaning an equal chance for all Americans to become successful. As part of his Square Deal, he regulated big businesses called trusts, supported labor laws for the working class, required meat and drugs to be inspected, and protected the environment. These ideas would influence later presidents to expand the government's role in the economy.

Besides being president, Roosevelt was an author and historian. He wrote 35 books about politics, ships, and hunting. He is thought to be one of America's presidents who read the most. He owned a large ranch in North Dakota. He also hunted large animals throughout the world and was active with the Boy Scouts of America. 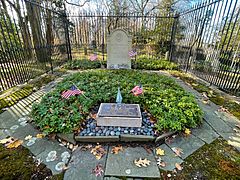 On the night of January 6, 1919, Roosevelt died in his sleep at Sagamore Hill after a blood clot had detached from a vein and traveled to his lungs. He was 60 years old.

Following a private farewell service in the North Room at Sagamore Hill, a simple funeral was held at Christ Episcopal Church in Oyster Bay. Vice President Thomas R. Marshall, Charles Evans Hughes, Warren G. Harding, Henry Cabot Lodge, and William Howard Taft were among the mourners. The snow-covered procession route to Youngs Memorial Cemetery was lined with spectators and a squad of mounted policemen who had ridden from New York City.

Roosevelt was buried on a hillside overlooking Oyster Bay.

Roosevelt is one of four Presidents to be carved in stone on Mount Rushmore. Historians consider him one of the best U.S. presidents.

Theodore Roosevelt is the namesake of many American schools. He has a national park in North Dakota named after him, a type of elk (big deer), as well as river in Brazil. The popular stuffed animal doll, the Teddy bear, was named after Roosevelt.

Two US Navy ships are named after him:

All content from Kiddle encyclopedia articles (including the article images and facts) can be freely used under Attribution-ShareAlike license, unless stated otherwise. Cite this article:
Theodore Roosevelt Facts for Kids. Kiddle Encyclopedia.