Jujutsu, also known as Jujitsu or Jiu-Jitsu, is a Japanese martial art and a method of close combat for defeating an armed and armored opponent in which one uses either a short weapon or none. 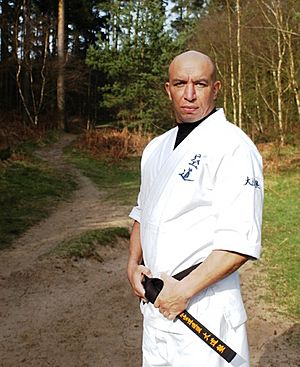 "Jū" can be translated to mean "gentle, soft, supple, flexible, pliable, or yielding". "Jutsu" can be translated to mean "art" or "technique" and represents manipulating the opponent's force against themselves rather than confronting it with one's own force. Jujutsu developed to combat the samurai of feudal Japan as a method for defeating an armed and armored opponent in which one uses no weapon, or only a short weapon.

Because striking against an armored opponent proved ineffective, practitioners learned that the most efficient methods for neutralizing an enemy took the form of pins, joint locks, and throws. These techniques were developed around the principle of using an attacker's energy against him, rather than directly opposing it.

There are many variations of the art, which leads to a diversity of approaches. Jujutsu schools may utilize all forms of grappling techniques to some degree (i.e. throwing, trapping, joint locks, holds, gouging, biting, disengagements, striking, and kicking). In addition to jujutsu, many schools teach the use of weapons.

Today, Jujutsu is practiced in both traditional and modern sports forms. Derived sport forms include the Olympic sport and martial art of judo, which was developed by Kanō Jigorō in the late 19th century from several traditional styles of jujutsu, and Brazilian jiu-jitsu, which was derived from earlier (pre–World War II) versions of Kodokan judo.

The word Jujutsu can be broken down into two parts. "Ju" is a concept. The idea behind this meaning of Ju is "to be gentle", "to give way", "to yield", "to blend", "to move out of harm's way". "Jutsu" is the principle or "the action" part of Ju-Jutsu. In Japanese this word means science or art.

All content from Kiddle encyclopedia articles (including the article images and facts) can be freely used under Attribution-ShareAlike license, unless stated otherwise. Cite this article:
Jujutsu Facts for Kids. Kiddle Encyclopedia.