Sport in Japan facts for kids 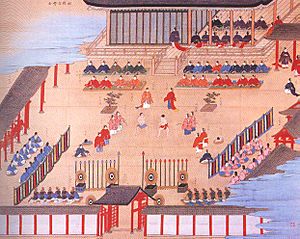 Sumo was a popular sport in Japan's Heian period

Sports in Japan are a part of Japanese culture. Japan has many traditional sports such as sumo, judo, karate, and kendo. Also, there are sports which were imported from the West such as baseball, soccer, golf and skiing. Sports are popular with both participants and onlookers.

In the Meiji period, sports which were imported from the West became popular. 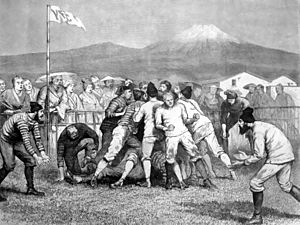 Another popular spectator sport is professional wrestling, locally known as puroresu (プロレス). While the sport was known in Japan before World War II, it did not become widely popular until the rise of Rikidōzan, considered the "father" of puroresu, in the 1950s. While similar to professional wrestling in the rest of the world in that winners are decided before the match, puroresu has become a unique style. Most match storylines play up the wrestlers' "fighting spirit". Also, because many Japanese wrestlers have martial arts backgrounds, most strikes during matches make full contact. Puroresu also enjoys close ties to mixed martial arts, with some companies often holding wrestling matches and MMA fights in the same event; because of this, both wrestlers and fans treat puroresu as a combat sport.

At first, Western sports were valued as a form of mental discipline, but they have become recreational activities.

In Japan, sports groups are an important part of school life. The time spent in these groups allows students to adjust to Japan's vertical society. For example, in sports, players learn to use keigo (formal, polite speech), respect and traditions.

Main page: Japan at the Olympics

The 1940 Summer Olympics and the 1940 Winter Olympics were planned for Japan, but the organizers withdrew in 1938 because of the Second Sino-Japanese War. These games were later cancelled because of World War II.

Japan did host the Olympic games three times, and has been confirmed as host for a fourth Olympics:

The Japanese translation of this book is available at: https://la84.org/wp-content/uploads/LA84WaterPolo_J-1.pdf

All content from Kiddle encyclopedia articles (including the article images and facts) can be freely used under Attribution-ShareAlike license, unless stated otherwise. Cite this article:
Sport in Japan Facts for Kids. Kiddle Encyclopedia.