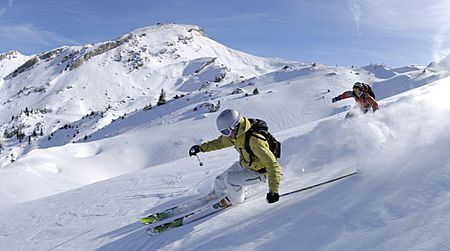 Skiing has a history of almost five millennia. Although modern skiing has evolved from beginnings in Scandinavia, it may have been practiced more than 100 centuries ago in what is now China, according to an interpretation of ancient paintings.

The word "ski" is one of a handful of words that Norway has exported to the international community. It comes from the Old Norse word "skíð" which means "split piece of wood or firewood".

Asymmetrical skis were used in northern Finland and Sweden until at least the late 19th century. On one foot, the skier wore a long straight non-arching ski for sliding, and a shorter ski was worn on the other foot for kicking. The underside of the short ski was either plain or covered with animal skin to aid this use, while the long ski supporting the weight of the skier was treated with animal fat in a similar manner to modern ski waxing.

Early skiers used one long pole or spear. The first depiction of a skier with two ski poles dates to 1741.

Troops on continental Europe were equipped with skis by 1747.

Skiing was primarily used for transport until the mid-19th century, but since then has also become a recreation and sport. Military ski races were held in Norway during the 18th century, and ski warfare was studied in the late 18th century. As equipment evolved and ski lifts were developed during the late 19th and early 20th centuries, two main genres of skiing emerged—Alpine (downhill) skiing and Nordic skiing. The main difference between the two is the type of ski binding (the way in which the ski boots are attached to the skis).

Also called "downhill skiing", Alpine skiing typically takes place on a piste at a ski resort. It is characterized by fixed-heel bindings that attach at both the toe and the heel of the skier's boot. Ski lifts, including chairlifts, bring skiers up the slope. Backcountry skiing can be accessed by helicopter, snowcat, hiking and snowmobile. Facilities at resorts can include night skiing, après-ski, and glade skiing under the supervision of the ski patrol and the ski school. Alpine skiing branched off from the older Nordic type of skiing around the 1920s when the advent of ski lifts meant that it was not necessary to walk any longer. Alpine equipment has specialized to the point where it can now only be used with the help of lifts. 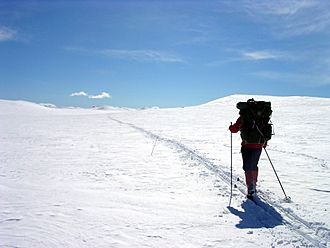 The Nordic disciplines include cross-country skiing and ski jumping, which both use bindings that attach at the toes of the skier's boots but not at the heels. Cross-country skiing may be practiced on groomed trails or in undeveloped backcountry areas. Ski jumping is practiced in certain areas that are reserved exclusively for ski jumping.

Telemark skiing is a ski turning technique and FIS-sanctioned discipline, which is named after the Telemark region of Norway. It uses equipment similar to Nordic skiing, where the ski bindings are attached only at the toes of the ski boots, allowing the skier's heel to be raised throughout the turn.

The following disciplines are sanctioned by the FIS. Many have their own world cups and are included in the Winter Olympic Games. 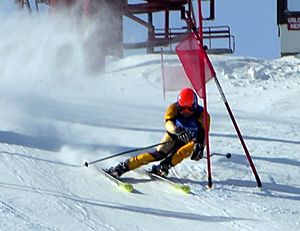 A skier goes through a ski gate

A ski gate is two sticks on a skiing race course that a skier needs to between. Ski gates are used in alpine skiing in downhill, Slalom, Giant Slalom and Super-G races. Downhill races have not many ski gates so skiers can be safe when they are going very fast. If a skier does not go between a ski gate, the judges say are removed from the race. First in the 1980s and now a lot of the time, ski gates have hinges near the snow. Some ski gates have flags at the top of the stick. 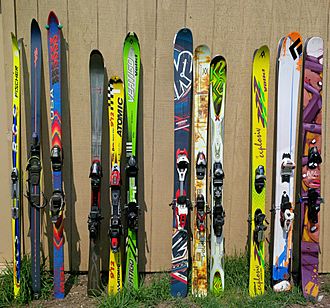 Technique has evolved along with ski technology and ski geometry. Early techniques included the telemark turn, the stem, the stem Christie, snowplough, and parallel turn.

Originally and primarily a winter sport, skiing can also be practiced indoors without snow, outdoors on grass, on dry ski slopes, with ski simulators, or with roller skis. A treadmill-like surface can also be used, to enable skiing while staying in the same place. Sand skiing involves sliding on sand instead of snow, but the skier uses conventional skis, ski poles, bindings and boots.

All content from Kiddle encyclopedia articles (including the article images and facts) can be freely used under Attribution-ShareAlike license, unless stated otherwise. Cite this article:
Skiing Facts for Kids. Kiddle Encyclopedia.