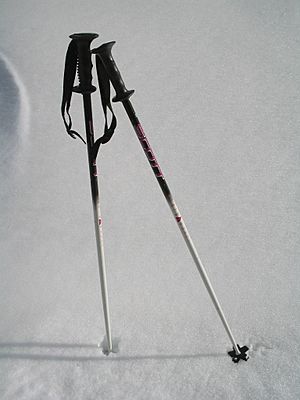 Ski poles are carried by skiers to help them not falling over. They are called "ski sticks" in the United Kingdom. In France, they are called "batons".

They are made from metal or composite material.

Ski poles have been used for a long time. People first used one ski pole when skiing. The first ski poles could also be used as a weapon. A flat circle was put near the bottom of the ski pole in the 17th century. This made it so the ski pole would not go all the way down to the ground. People started to use two ski poles by the start of World War I.

A steel ski pole was first made in 1937. It was invented by Otto Lang. Before this, some people used bamboo for ski poles. More and more people started using metal ski poles after World War II.

All content from Kiddle encyclopedia articles (including the article images and facts) can be freely used under Attribution-ShareAlike license, unless stated otherwise. Cite this article:
Ski pole Facts for Kids. Kiddle Encyclopedia.