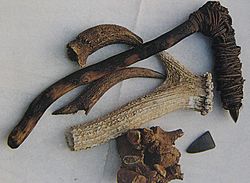 A weapon is an object that can be used to attack or injure a person or animal. People have used weapons since very ancient times. While other animals use weapons, in most cases they are attached to the animal (teeth, claws, tusks, etc.). In man's case they are detached and constantly selected for the purpose at hand. Man has been constantly developing newer and better weapons ever since he picked up the first rock.

Some of the oldest remains that we have of ancient people are weapons made of stone. Ancient people also used spears. Bows and arrows were in use by about 20,000 BC. During the Bronze age people learned to make things of metal, many people used swords. People also built huge machines which could throw rocks to destroy the defensive walls of enemy cities. Some of these machines were called catapults or siege engines. Later, gunpowder was invented in China and the Europeans began using it to make guns and cannons. These weapons were much better than the older weapons, and helped the Europeans to conquer people in many parts of the world. People in many parts of the world used guns such as rifles and shotguns for hunting animals, and handguns for shooting other people.

People continued to invent new weapons. In 1884 the machine gun was invented, which could shoot many bullets very fast. Soldiers began to use land mines, a bomb hidden in the ground, which explodes when someone walks on it. Small submarines were able to use torpedos to attack bigger ships and hide under the ocean. When airplanes were invented, people began to use them to shoot enemies and to drop bombs on them. They built tanks which had big guns and strong armor. Poison gas was used in World War I but was outlawed and rarely used afterwards.

In World War II, cities were heavily bombed from the air and Nazi Germany used V-2 missiles to carry bombs to England. Both sides used many firebombs. At the end of World War II, the United States used atomic bombs (nuclear bombs) to destroy the Japanese cities of Hiroshima and Nagasaki.

A Maxim machine gun from the 1890s

Old-fashioned weapons still kill many people in wars and fighting. In wars in Africa in the 1990s and early 21st century, many people were killed with machetes (big knives). People sometimes try to make laws, treaties, and international agreements to try to control weapons because they are worried about all the killing done with them. Laws vary from country to country, for example, in the United States, the "right to keep and bear arms" is guaranteed to all citizens by the Constitution. A country may say that people in that country cannot keep or use guns, or only when the government allows it. The laws of war forbid certain weapons, and countries may agree with each other that they should not use certain weapons against each other, or should not have more than a certain number of particular kinds of weapons.

Things specifically made as weapons that most ordinary people can carry, include non lethal:

Weapons that soldiers or police personnel carry, include:

Portable firearms are also used by for hunting and for marksmanship practice.

Weapons that the defense people of a national government have, include:

Other types of weapons include:

All content from Kiddle encyclopedia articles (including the article images and facts) can be freely used under Attribution-ShareAlike license, unless stated otherwise. Cite this article:
Weapon Facts for Kids. Kiddle Encyclopedia.