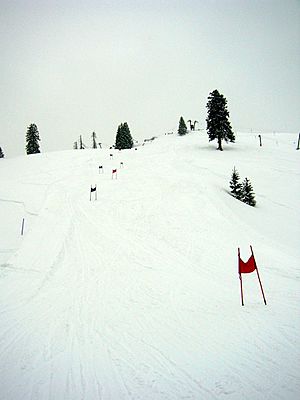 Slalom "gates" establish a course for the event 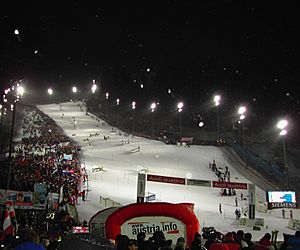 Slalom is an alpine skiing and alpine snowboarding discipline, involving skiing between poles or gates. These are spaced more closely than those in giant slalom, super giant slalom and downhill, necessitating quicker and shorter turns. Internationally, the sport is contested at the FIS Alpine World Ski Championships, and at the Olympic Winter Games.

The term may also refer to water skiing on one ski.

Slalom was first recognized as part of the Winter Olympic Games in 1936.

Ingemar Stenmark (Sweden, his career 1973-1989) and Vreni Schneider (Switzerland, her career 1984-1995) are the record holder as the most World Cup titles in Slalom discipline. Stenmark won 8 times and Schneider won 6 times.

These are necessary items for the alpine skiing competitions.

All content from Kiddle encyclopedia articles (including the article images and facts) can be freely used under Attribution-ShareAlike license, unless stated otherwise. Cite this article:
Slalom skiing Facts for Kids. Kiddle Encyclopedia.