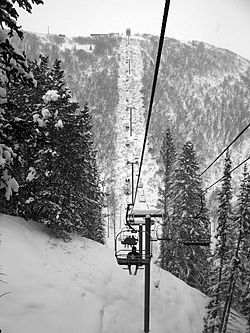 A chairlift in Park City, Utah

A chairlift is a type of public transport. It is like a chair that runs on cables. The cable is placed over the chair to lift it from the ground and they run between two (or more) stations. The cable is moved around by motors and lifted from the ground by towers. There are many chairs on the cable so that many people can be transported.

Chairlifts are found in skiing resorts, where they make skiers go up the mountain. They are sometimes better than gondola lifts because the skier does not need to remove the skis. He/she can sit down on the chair and then leave it at the top of the mountain very quickly. Old chairlifts are small and slow. Newer ones can carry up to 8 people. They are also faster overall, but they slow down at the station, making it easier to get on and off. Sometimes they even have a glass bubble that can be closed to keep people warm inside.

All content from Kiddle encyclopedia articles (including the article images and facts) can be freely used under Attribution-ShareAlike license, unless stated otherwise. Cite this article:
Chairlift Facts for Kids. Kiddle Encyclopedia.