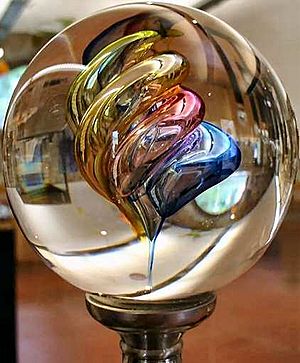 A glass ball with coloured glass shapes inside 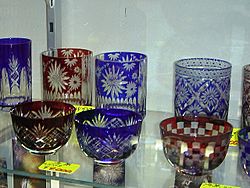 Edo-Kiriko, a traditional cut glass craft in Asakusa, Tokyo, Japan. The glass has two layers, a coloured layer outside a clear layer

Glass is a hard material that can be made in many shapes. It is usually transparent, but it can also be made in colours. Glass is mainly made of silica (sand is an example).

By changing the proportions, and adding different ingredients, many kinds of glass can be made. Coloured glass is made by adding small amounts of metal oxides. For example, a blue colour is given by tiny amounts of cobalt oxide.

Crystal glass is made by adding lead and zinc oxides. It is not actually a crystal because all glass is a non-crystalline solid. Crystal glass is called cut glass if it has been cut by hand:

" 'Cut glass' is glass that has been decorated entirely by hand by use of rotating wheels. Cuts are made in an otherwise completely smooth surface of the glass by workers holding and moving the piece against various sized metal or stone wheels".

Because glass is used to make lenses, the word "glasses" means eyeglasses.

The myth that glass is actually a liquid comes from the fact that old windows in houses and churches (200–300 years old) are sometimes a little out of shape: thicker at the bottom than the top. This is actually due to the process of glass making in the past which led to the glass pane being thicker at one edge than the other. It was sensible to install the windows with the thick edge at the bottom. Sometimes a window can be found with the thick edge at the top of the window.

Glass is in widespread use largely due to the production of glass compositions that are transparent to visible wavelengths of light. In contrast, polycrystalline materials do not in general transmit visible light. The individual crystallites may be transparent, but their facets (grain boundaries) reflect or scatter light resulting in diffuse reflection. Glass does not contain the internal subdivisions associated with grain boundaries in polycrystals and hence does not scatter light in the same manner as a polycrystalline material. The surface of a glass is often smooth since during glass formation the molecules of the supercooled liquid are not forced to dispose in rigid crystal geometries and can follow surface tension, which imposes a microscopically smooth surface. These properties, which give glass its clearness, can be retained even if glass is partially light-absorbing—i.e., colored.

Glass has the ability to refract, reflect, and transmit light following geometrical optics, without scattering it. It is used in the manufacture of lenses and windows. Common glass has a refraction index around 1.5. According to Fresnel equations, the reflectivity of a sheet of glass is about 4% per surface (at normal incidence in air), and the transmissivity of one element (two surfaces) is about 90%. Glass also finds application in optoelectronics—e.g., for light-transmitting optical fibers.

In the process of manufacture, silicate glass can be poured, formed, extruded and moulded into forms ranging from flat sheets to highly intricate shapes. The finished product is brittle and will fracture, unless laminated or specially treated, but is extremely durable under most conditions. It erodes very slowly and can withstand the action of water. It is resilient to chemical attack and is an ideal material for the manufacture of containers for foodstuffs and most chemicals.

Following the glass batch preparation and mixing, the raw materials are transported to the furnace. Soda-lime glass for mass production is melted in gas fired units. Smaller scale furnaces for specialty glasses include electric melters, pot furnaces, and day tanks. After melting, homogenization and refining (removal of bubbles), the glass is formed. Flat glass for windows and similar applications is formed by the float glass process, developed between 1953 and 1957 by Sir Alastair Pilkington and Kenneth Bickerstaff of the UK's Pilkington Brothers, who created a continuous ribbon of glass using a molten tin bath on which the molten glass flows unhindered under the influence of gravity. The top surface of the glass is subjected to nitrogen under pressure to obtain a polished finish. Container glass for common bottles and jars is formed by blowing and pressing methods. Further glass forming techniques are summarized in the table Glass forming techniques.

Color in glass may be obtained by addition of electrically charged ions (or color centers) that are homogeneously distributed, and by precipitation of finely dispersed particles (such as in photochromic glasses). Ordinary soda-lime glass appears colorless to the naked eye when it is thin, although iron(II) oxide (FeO) impurities of up to 0.1 wt% produce a green tint, which can be viewed in thick pieces or with the aid of scientific instruments. Further FeO and Cr2O3 additions may be used for the production of green bottles. Sulfur, together with carbon and iron salts, is used to form iron polysulfides and produce amber glass ranging from yellowish to almost black. A glass melt can also acquire an amber color from a reducing combustion atmosphere. Manganese dioxide can be added in small amounts to remove the green tint given by iron(II) oxide. When used in art glass or studio glass glass is colored using closely guarded recipes that involve specific combinations of metal oxides, melting temperatures and 'cook' times. Most colored glass used in the art market is manufactured in volume by vendors who serve this market although there are some glass makers with the ability to make their own color from raw materials.

The term glass developed in the late Roman Empire. It was in the Roman glassmaking center at Trier, now in modern Germany, that the late-Latin term glesum originated, probably from a Germanic word for a transparent, lustrous substance. Naturally occurring glass, especially the volcanic glass obsidian, has been used by many Stone Age societies across the globe for the production of sharp cutting tools and, due to its limited source areas, was extensively traded. But in general, archaeological evidence suggests that the first true glass was made in coastal north Syria, Mesopotamia or Ancient Egypt. The earliest known glass objects, of the mid third millennium BCE, were beads, perhaps initially created as accidental by-products of metal-working (slags) or during the production of faience, a pre-glass vitreous material made by a process similar to glazing.

Glass remained a luxury material, and the disasters that overtook Late Bronze Age civilizations seem to have brought glass-making to a halt. Indigenous development of glass technology in South Asia may have begun in 1730 BCE. In ancient China, though, glassmaking seems to have a late start, compared to ceramics and metal work. In the Roman Empire, glass objects have been recovered across the Roman Empire in domestic, industrial and funerary contexts. 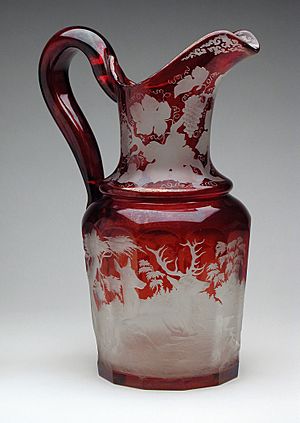 Glass was used extensively during the Middle Ages. Anglo-Saxon glass has been found across England during archaeological excavations of both settlement and cemetery sites. Glass in the Anglo-Saxon period was used in the manufacture of a range of objects including vessels, beads, windows and was also used in jewellery. From the 10th-century onwards, glass was employed in stained glass windows of churches and cathedrals, with famous examples at Chartres Cathedral and the Basilica of Saint Denis. By the 14th-century, architects were designing buildings with walls of stained glass such as Sainte-Chapelle, Paris, (1203-1248) and the East end of Gloucester Cathedral. Stained glass had a major revival with Gothic Revival architecture in the 19th-century. With the Renaissance, and a change in architectural style, the use of large stained glass windows became less prevalent. The use of domestic stained glass increased until it was general for every substantial house to have glass windows. These were initially of small panes leaded together, but with the changes in technology, glass could be manufactured relatively cheaply in increasingly larger sheets, leading to larger window panes, and, in the 20th-century, to much larger windows in ordinary domestic and commercial premises. 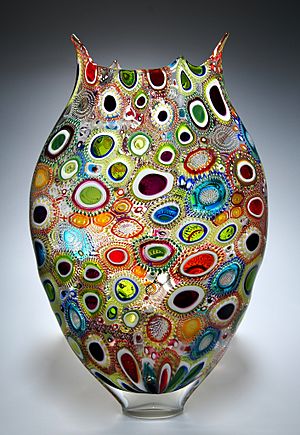 Studio glass by David Patchen. Multiple colors within a single object increases the difficulty of production, as each color has different chemical and physical properties when molten.

In the 20th-century, new types of glass such as laminated glass, reinforced glass and glass bricks have increased the use of glass as a building material. Multi-storey buildings are frequently constructed with curtain walls made almost entirely of glass. Similarly, laminated glass has been widely applied to vehicles for windscreens. While glass containers have always been used for storage and are valued for their hygienic properties, glass has been utilised increasingly in industry. Optical glass for spectacles has been in use since the late Middle Ages. The production of lenses has become increasingly proficient, aiding astronomers as well as having other application in medicine and science.

From the 19th century, there was a revival in many ancient glass-making techniques including Cameo glass, achieved for the first time since the Roman Empire and initially mostly used for pieces in a neo-classical style. The Art Nouveau movement made great use of glass, with René Lalique, Émile Gallé, and Daum of Nancy producing colored vases and similar pieces, often in cameo glass, and also using lustre techniques. Louis Comfort Tiffany in America specialized in stained glass, both secular and religious, and his famous lamps. The early 20th-century saw the large-scale factory production of glass art by firms such as Waterfords and Lalique. From about 1960 onwards there have been an increasing number of small studios hand-producing glass artworks, with glass artists began to class themselves as in effect sculptors working in glass, and their works as part fine arts.

All content from Kiddle encyclopedia articles (including the article images and facts) can be freely used under Attribution-ShareAlike license, unless stated otherwise. Cite this article:
Glass Facts for Kids. Kiddle Encyclopedia.