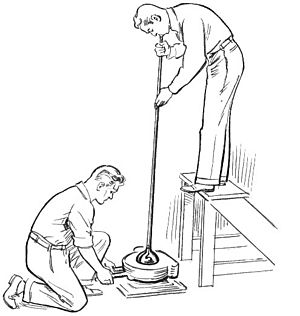 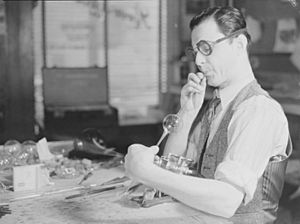 Glassblower Romeo Lefebvre in his workshop in Montreal, 1942 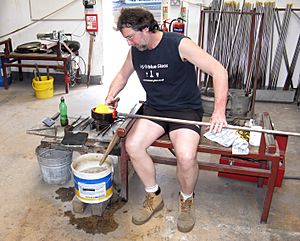 A stage in the manufacture of a Bristol blue glass ship’s decanter. The blowpipe is being held in the glassblower's left hand. The glass is glowing yellow.

Glassblowing is a glassforming technique that involves inflating molten glass into a bubble (or parison), with the aid of a blowpipe (or blow tube). A person who blows glass is called a glassblower, glassmith, or gaffer. A lampworker (often also called a glassblower or glassworker) manipulates glass with the use of a torch on a smaller scale, such as in producing precision laboratory glassware out of borosilicate glass.

As a novel glass forming technique created in the middle of the 1st century BC, glassblowing exploited a working property of glass that was previously unknown to glassworkers, inflation, the expansion of a molten blob of glass by introducing a small amount of air to it. That is based on the liquid structure of glass where the atoms are held together by strong chemical bonds in a disordered and random network, therefore molten glass is viscous enough to be blown and gradually hardens as it loses heat.

To increase the stiffness of the molten glass, which in turn facilitates the process of blowing, there was a subtle change in the composition of glass. With reference to their studies of the ancient glass assemblages from Sepphoris of Israel, Fischer and McCray postulated that the concentration of natron, which acts as flux in glass, is slightly lower in blown vessels than those manufactured by casting. Lower concentration of natron would have allowed the glass to be stiffer for blowing.

During blowing, thinner layers of glass cool faster than thicker ones and become more viscous than the thicker layers. That allows production of blown glass with uniform thickness instead of causing blow-through of the thinned layers.

This method held a pre-eminent position in glassforming ever since its introduction in the middle of the 1st century BC until the late 19th century, and is still widely used nowadays as a glassforming technique, especially for artistic purposes. The process of free-blowing involves the blowing of short puffs of air into a molten portion of glass called a '"gather" which has been spooled at one end of the blowpipe. This has the effect of forming an elastic skin on the interior of the glass blob that matches the exterior skin caused by the removal of heat from the furnace. The glassworker can then quickly inflate the molten glass to a coherent blob and work it into a desired shape.

Researchers at the Toledo Museum of Art attempted to reconstruct the ancient free-blowing technique by using clay blowpipes. The result proved that short clay blowpipes of about 30–60 cm (12–24 in) facilitate free-blowing because they are simple to handle and to manipulate and can be re-used several times. Skilled workers are capable of shaping almost any vessel forms by rotating the pipe, swinging it and controlling the temperature of the piece while they blow. They can produce a great variety of glass objects, ranging from drinking cups to window glass.

An outstanding example of the free-blowing technique is the Portland Vase, which is a cameo manufactured during the Roman period. An experiment was carried out by Gudenrath and Whitehouse with the aim of re-creating the Portland Vase. A full amount of blue glass required for the body of the vase was gathered on the end of the blowpipe and was subsequently dipped into a pot of hot white glass. Inflation occurred when the glassworker blew the molten glass into a sphere which was then stretched or elongated into a vase with a layer of white glass overlying the blue body. 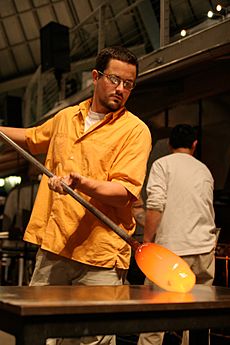 Glassblower Jean-Pierre Canlis sculpting a section of his piece "Insignificance"

Mold-blowing was an alternative glassblowing method that came after the invention of free-blowing, during the first part of the second quarter of the 1st century AD. A glob of molten glass is placed on the end of the blowpipe, and is then inflated into a wooden or metal carved mold. In that way, the shape and the texture of the bubble of glass is determined by the design on the interior of the mold rather than the skill of the glassworker.

Two types of molds, namely single-piece mold and multi-piece mold, are frequently used to produce mold-blown vessels. The former allows the finished glass object to be removed in one movement by pulling it upwards from the single-piece mold and is largely employed to produce tableware and utilitarian vessels for storage and transportation. Whereas the latter is made in multi-paneled mold segments that join together, thus permitting the development of more sophisticated surface modeling, texture and design.

The Roman leaf beaker which is now on display in the J. Paul Getty Museum was blown in a three-part mold decorated with the foliage relief frieze of four vertical plants. Meanwhile, Taylor and Hill tried to reproduce mold-blown vessels by using three-part molds made of different materials. The result suggested that metal, in particular bronze, molds are more effective in producing high-relief design on glass than plaster molds and wooden molds. 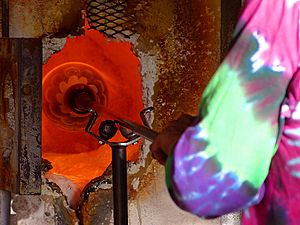 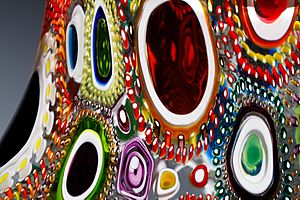 Glass created from complex murrine and zanfirico cane can possess a great amount of detail. 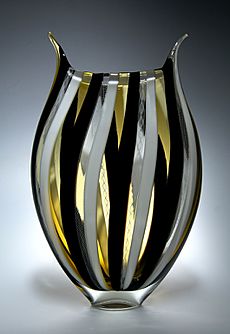 Glass can be made with precise striped patterns through a process called cane which involves the use of rods of colored glass.

Glassblowing involves three furnaces. The first, which contains a crucible of molten glass, is simply referred to as the furnace. The second is called the glory hole, and is used to reheat a piece in between steps of working with it. The final furnace is called the lehr or annealer, and is used to slowly cool the glass, over a period of a few hours to a few days, depending on the size of the pieces. This keeps the glass from cracking or shattering due to thermal stress. Historically, all three furnaces were contained in one structure, with a set of progressively cooler chambers for each of the three purposes.

The major tools used by a glassblower are the blowpipe (or blow tube), punty (or punty rod, pontil, or mandrel), bench, marver, blocks, jacks, paddles, tweezers, newspaper pads, and a variety of shears.

The tip of the blowpipe is first preheated; then dipped in the molten glass in the furnace. The molten glass is "gathered" onto the end of the blowpipe in much the same way that viscous honey is picked up on a honey dipper. This glass is then rolled on the marver, which was traditionally a flat slab of marble, but today is more commonly a fairly thick flat sheet of steel. This process, called marvering, forms a cool skin on the exterior of the molten glass blob, and shapes it. Then air is blown into the pipe, creating a bubble. Next, the glassworker can gather more glass over that bubble to create a larger piece. Once a piece has been blown to its approximate final size, the bottom is finalized. Then, the molten glass is attached to a stainless steel or iron rod called a punty for shaping and transferring the hollow piece from the blowpipe to provide an opening and/or to finalize the top.

The bench is a glassblower's workstation, and has a place for the glassblower to sit, a place for the handheld tools, and two rails that the pipe or punty rides on while the blower works with the piece. Blocks are ladle-like tools made from water-soaked fruitwood, and are used similarly to the marver to shape and cool a piece in the early steps of creation. In similar fashion, pads of water-soaked newspaper (roughly 6 inches square, one-half to one inch thick), held in the bare hand, can be used to shape the piece. Jacks are tools shaped somewhat like large tweezers with two blades, which are used for forming shape later in the creation of a piece. Paddles are flat pieces of wood or graphite used for creating flat spots such as a bottom. Tweezers are used to pick out details or to pull on the glass. There are two important types of shears, straight shears and diamond shears. Straight shears are essentially bulky scissors, used for making linear cuts. Diamond shears have blades that form a diamond shape when partially open. These are used for cutting off masses of glass.

There are many ways to apply patterns and color to blown glass, including rolling molten glass in powdered color or larger pieces of colored glass called frit. Complex patterns with great detail can be created through the use of cane (rods of colored glass) and murrine (rods cut in cross-sections to reveal patterns). These pieces of color can be arranged in a pattern on a flat surface, and then "picked up" by rolling a bubble of molten glass over them. One of the most exacting and complicated caneworking techniques is "reticello", which involves creating two bubbles from cane, each twisted in a different direction and then combining them and blowing out the final form.

A lampworker, usually operating on a much smaller scale, historically used alcohol lamps and breath or bellows-driven air to create a hot flame at a workbench to manipulate preformed glass rods and tubes. These stock materials took form as laboratory glassware, beads, and durable scientific "specimens"—miniature glass sculpture. The craft, which was raised to an art form in the late 1960s by Hans Godo Frabel (later followed by lampwork artists such as Milon Townsend and Robert Mickelson), is still practised today. The modern lampworker uses a flame of oxygen and propane or natural gas. The modern torch permits working both the soft glass from the furnace worker and the borosilicate glass (low-expansion) of the scientific glassblower. This latter worker may also have multiple headed torches and special lathes to help form the glass or fused quartz used for special projects.

All content from Kiddle encyclopedia articles (including the article images and facts) can be freely used under Attribution-ShareAlike license, unless stated otherwise. Cite this article:
Glassblowing Facts for Kids. Kiddle Encyclopedia.