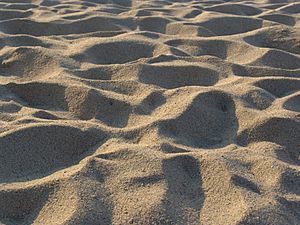 Sand dune on a beach in Calabria 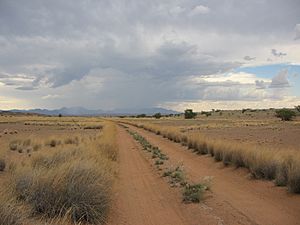 A sand road in Namibia

Sand is a mixture of very small pieces of different rocks or minerals. It is the same minerals from which those pieces are broken, such as granite and feldspar. Sand is gritty to touch. It is a naturally occurring granular material composed of finely divided rock and mineral particles. Sand is also formed various rocks by weathering and erosion. Erosion breaks large boulders into smaller rocks. They get smaller and smaller until they reach the beach or a low-lying area as sand.

Sand grains are between the size of gravel grains (which is from 2 mm to 64 mm) and the size of silt (which is around 0.0625 mm to 0.004 mm). Most sand is found on beaches, and in deserts. The most common sands are made of silica (silicon dioxide, or SiO2). Calcium carbonate is the second more common.

Sand dunes are made when wind or a river pulls sand into a mountain-like shape. They can be found in deserts, but sometimes high up on beaches too.

Sand is crucial in the process of mixing concrete. It can also be used to make sand castles. Sand is sometimes in households for aesthetic purposes. 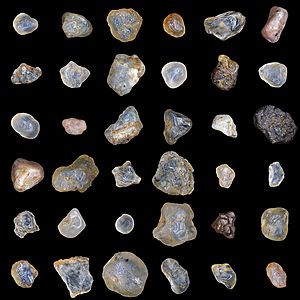 Sand grains of yellow building sand. Microscope Lumam P-8. EPI lighting. The photo of each grain of sand is the result of multifocal stacking..

All content from Kiddle encyclopedia articles (including the article images and facts) can be freely used under Attribution-ShareAlike license, unless stated otherwise. Cite this article:
Sand Facts for Kids. Kiddle Encyclopedia.