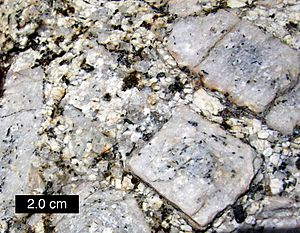 Feldspar is the name of a group of rock-forming minerals that make up as much as 60% of the Earth's crust.

Feldspar forms crystals from magma in both intrusive and extrusive rocks, and they can also happen as compact minerals, as veins, and are also present in many types of metamorphic rock. Rock formed entirely of plagioclase feldspar is known as anorthosite. Feldspar is also found in many types of sedimentary rock.

Feldspar is typically reddish or pale pink in color, and has a hardness of 6 on the Mohs scale, making it roughly as hard to scratch as glass.

There are two groups of feldspar, both made out of silica and aluminum:

Feldspar is a common raw material used in glassmaking, ceramics, and to some extent as a filler and extender in paint, plastics, and rubber. In glassmaking, alumina from feldspar improves product hardness, durability, and resistance to chemical corrosion. In ceramics, the alkalis in feldspar (calcium oxide, potassium oxide, and sodium oxide) act as a flux, lowering the melting temperature of a mixture. Fluxes melt at an early stage in the firing process, forming a glassy matrix that bonds the other components of the system together. In the US, about 66% of feldspar is consumed in glassmaking, including glass containers and glass fiber. Ceramics (including electrical insulators, sanitaryware, pottery, tableware, and tile) and other uses, such as fillers, accounted for the remainder.

In earth sciences and archaeology, feldspars are used for K-Ar dating, argon-argon dating, and luminescence dating.

In October 2012, the Mars Curiosity rover analyzed a rock that turned out to have a high feldspar content.

All content from Kiddle encyclopedia articles (including the article images and facts) can be freely used under Attribution-ShareAlike license, unless stated otherwise. Cite this article:
Feldspar Facts for Kids. Kiddle Encyclopedia.