A sample of pyroxenite, a rock consisting mostly of pyroxene minerals. 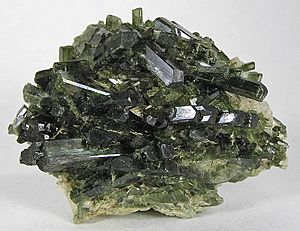 The pyroxenes are a group of important rock-forming inosilicate minerals found in many igneous and metamorphic rocks. They share a common structure consisting of single chains of silica crystals with the general formula XY(Si,Al)2O6 where X and Y represents metal ions. Although aluminium substitutes extensively for silicon in silicates such as feldspars and amphiboles, the substitution occurs only to a limited extent in most pyroxenes.

Pyroxenite is an igneous rock made up of minerals from the pyroxene group.

All content from Kiddle encyclopedia articles (including the article images and facts) can be freely used under Attribution-ShareAlike license, unless stated otherwise. Cite this article:
Pyroxene Facts for Kids. Kiddle Encyclopedia.