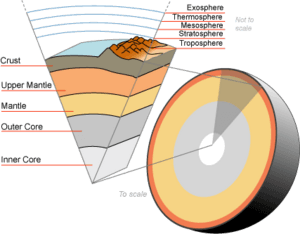 Past episodes of melting and volcanism at the outer levels of the mantle have produced a very thin crust of crystallized melt products near the surface, where we live. The gases evolved during the melting of Earth's mantle have a large effect on the composition and size of Earth's atmosphere.

A thin crust, the lower part of the lithosphere, surrounds the mantle and is about 5 to 75 km thick. There are two main zones in the upper mantle. The uppermost mantle plus overlying crust are relatively rigid and form the lithosphere, an irregular layer with a maximum thickness of perhaps 200 km, of which the uppermost mantle is 120 to 50 km thick.

Below the lithosphere the upper mantle becomes notably more plastic. It is called the asthenosphere, and is composed of flowing rock in the state of plasticity, about 200 km thick.

The lower mantle is much thicker than the upper mantle. It is made of magma, under great pressure, and so is thicker (higher viscosity) and flows less easily. The lower mantles temperature has a max of about 4,000 °C (7,000 °F).

Place with no crust

In 2007 a team of scientists on board the RRS James Cook went to an area of the Atlantic seafloor where the mantle has no crust covering. The anomaly is mid-way between the Cape Verde Islands and the Caribbean in the Atlantic Ocean, at or near the Mid-Atlantic Ridge. It is about three kilometres under the ocean surface and covers thousands of square kilometres.

Other such 'Oceanic Core Complexes' (OCCs) were found later. Many have active hydrothermal vents.

All content from Kiddle encyclopedia articles (including the article images and facts) can be freely used under Attribution-ShareAlike license, unless stated otherwise. Cite this article:
Earth's mantle Facts for Kids. Kiddle Encyclopedia.