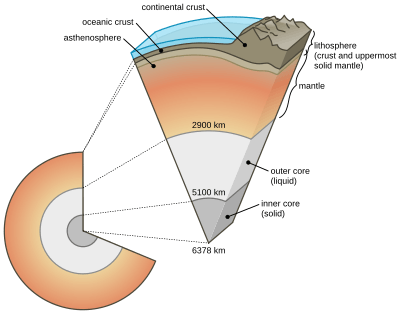 The Earth's core is the part of Earth in the middle of our planet. It has a solid inner core and a liquid outer core. The temperature of the outer core ranges from 4400 °C in the outer regions to 6100 °C near the inner core.

Without the outer core, life on Earth would be very different. Convection of liquid metals in the outer core creates the Earth's magnetic field. This magnetic field extends outward from the Earth for several thousand kilometers, and creates a protective magnetosphere around the Earth that deflects the Sun's solar wind. Without this field, the solar wind would directly strike the Earth's atmosphere. This might have removed the Earth's atmosphere, making the planet nearly lifeless. It may have happened to Mars.

In 2015, Prof Xiaodong Song from the University of Illinois and other researchers in China suggested the inner core has two layers. The seismic wave data suggests that crystals in the "inner inner core" are in an east-to-west direction. Those in the "outer inner core" are lined up north to south. Another scientist commented: "If this is true, it would imply that something very substantial happened to flip the orientation of the core to turn the alignment of crystals in the inner core north-south as is seen today in its outer parts". Other scientists are checking their data.

All content from Kiddle encyclopedia articles (including the article images and facts) can be freely used under Attribution-ShareAlike license, unless stated otherwise. Cite this article:
Earth's core Facts for Kids. Kiddle Encyclopedia.