Structure of the Earth facts for kids 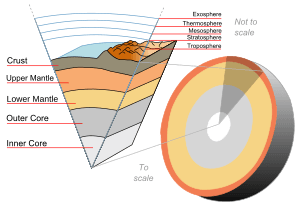 Earth cutaway diagram. The proportions are not accurate

The structure of the Earth is divided into layers. These layers are both physically and chemically different. The Earth has an outer solid crust, a highly viscous mantle, a liquid outer core, and a solid inner core.The shape of the earth is an oblate spheroid, because it is slightly flattened at the poles and bulging at the equator.

The boundaries between these layers were discovered by seismographs which showed the way vibrations bounced off the layers during earthquakes. Between the Earth's crust and the mantle is a boundary called the moho. It was the first discovery of a major change in the Earth's structure as one goes deeper.

A full explanation of these effects is not yet clear. It seems that with the increasing heat and pressure comes changes in the crystallization of minerals, so that the composition might be a kind of changing mixture of liquid and crystals. 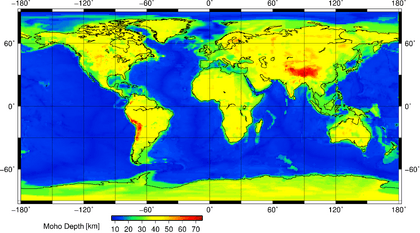 World map showing the position of the Moho.

The moho, properly called the Mohorovičić discontinuity, is the boundary between the Earth's crust and the mantle. It was discovered by Croatian seismologist Andrija Mohorovičić in 1909. He discovered that seismograms of earthquakes showed two kinds of seismic waves. There is a shallow slower wave which arrives first, and a deep faster wave which arrives second. He reasoned that the deeper wave changed speed as it got just below the mantle. The reason it went faster was that the material of the mantle was different from that of the crust.

The discontinuity lies 30–40 km below the surface of continents, and less deep below the ocean floors.

Geologists have been trying to get at the Moho for years. During the late 1950s and early 1960s Project Mohole did not get enough support, and was cancelled by the United States Congress in 1967. Efforts were also made by the Soviet Union. They reached a depth of 12,260 metres (40,220 ft) over 15 years, the world's deepest hole, before abandoning the attempt in 1989.

Reaching the discontinuity is still an important scientific target. A more recent proposal considers a self-descending tungsten capsule. The idea is that the capsule would be filled with radioactive material. This would give off enough heat to melt the surrounding rock, and the capsule would be pulled down by gravity.

The Japanese project Chikyū Hakken ("Earth discovery") plans to use a drilling shop to drill down through the thinner ocean crust. On 6 September 2012 Scientific deep sea drilling vessel Chikyu set a new world record by drilling down and obtaining rock samples from deeper than 2,111 meters below the seafloor off Shimokita Peninsula of Japan in the northwest Pacific Ocean.

Macquarie Island, off Tasmania, is at the meeting-point of two huge oceanic plates: the Pacific Plate and the Indo-Australian Plate. The island is made of material pushed up from deep in the Earth's mantle. It is thought that the green ophiolite rock was formed at the moho, and was brought up by a mid-oceanic ridge. Now it comes to the surface because the two plates are scrunching together. It is the only place on Earth where this is happening at present. There are other places where ophiolite is found, but they were brought up many millions of years ago. Ophiolites are found in all the major mountain belts of the world.

All content from Kiddle encyclopedia articles (including the article images and facts) can be freely used under Attribution-ShareAlike license, unless stated otherwise. Cite this article:
Structure of the Earth Facts for Kids. Kiddle Encyclopedia.