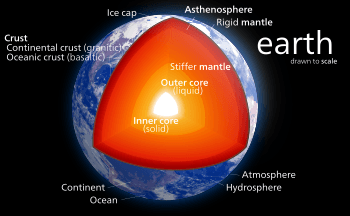 The internal structure of Earth 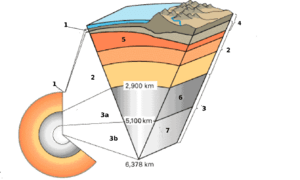 The inner core is labeled Number 7 on this cross-section of the Earth.

The inner core is the very center of the Earth, and the hottest part of the planet. It is a mainly a solid ball with a radius of about 1,220 km (760 mi), according to seismological studies. It is believed to consist mostly of an iron–nickel alloy and to be about the same temperature as the surface of the Sun: about 5700 K (5400 °C).

The inner core was discovered by Inge Lehmann in 1929, using seismology. Lehman was studying a large New Zealand earthquake. An earthquake makes vibrations which move through the inside of the Earth. The vibrations Lehmann studied seemed to be moving across something solid in the center of the planet. She called this the inner core. She wrote about it for many years, but it was not proved to exist until 1970.

The inner core is more than 5,000 kilometers below the earth's surface. The pressure in Earth's inner core is about 3,500,000 atmospheres. Iron can only be solid at such high temperatures because its melting temperature increases dramatically at such pressures.

All content from Kiddle encyclopedia articles (including the article images and facts) can be freely used under Attribution-ShareAlike license, unless stated otherwise. Cite this article:
Earth's inner core Facts for Kids. Kiddle Encyclopedia.