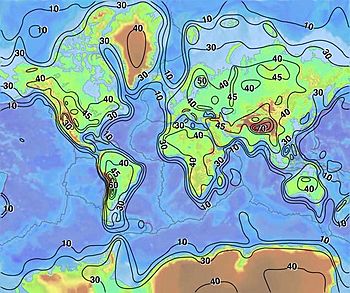 The thickness of the Earth's crust (km).

The continental crust is the layer of granitic, sedimentary, and metamorphic rocks which form the continents and the areas of shallow seabed close to their shores, known as continental shelves.

It consists mostly of feldspar and other sialic rocks. It is less dense than the material of the Earth's mantle, which consists of mafic rock. Continental crust is also less dense than oceanic crust, though it is considerably thicker; mostly 35 to 40 km versus the average oceanic thickness of around 7–10 km. About 40% of the Earth's surface lies on-top of continental crust.

All content from Kiddle encyclopedia articles (including the article images and facts) can be freely used under Attribution-ShareAlike license, unless stated otherwise. Cite this article:
Continental crust Facts for Kids. Kiddle Encyclopedia.